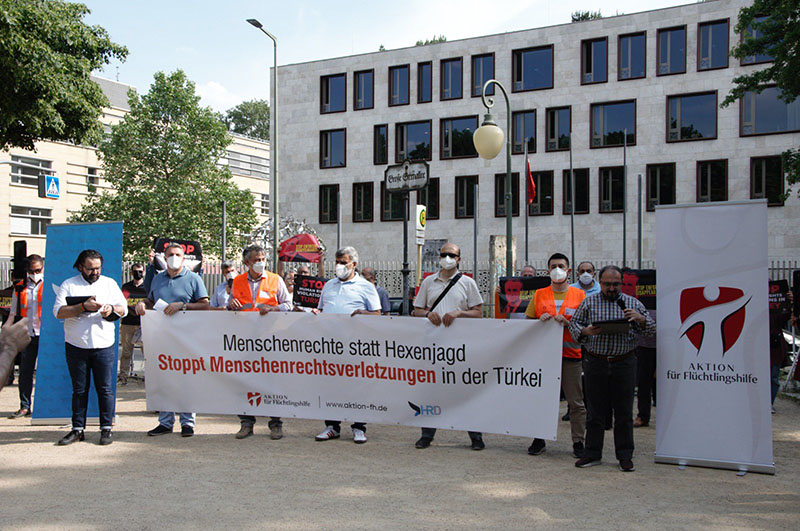 Representatives from two human rights organizations gathered in front of the Turkish Embassy in Berlin on Thursday, demanding that a Turkish-Kyrgyz educator in Kyrgyzstan — who is feared to have been abducted by Turkey — be found immediately, Turkish media reported on Thursday.

Members of Aktion für Flüchtlingshilfe, a Berlin-based association that helps refugees, and Human Rights Defenders (HRD), an NGO founded by Turkish lawyers, former bureaucrats and entrepreneurs in Cologne who are political asylum seekers in Germany and Europe, on Thursday stood in solidarity with Orhan İnandı.

The protest was staged in addition to those in Bishkek, where İnandı, the founder and president of the Turkish-Kyrgyz Sapat school network operating in Kyrgyzstan, went missing on May 31. The educator is feared to have been abducted by Turkey’s National Intelligence Organization (MİT) due to his alleged links to the Gülen movement.

Turkey claims the founder of the school network is Turkish Islamic cleric Fethullah Gülen, whose movement is labeled as a terrorist organization by the Turkish government and accused of masterminding a failed coup in Turkey in July 2016. The movement strongly denies any involvement in the abortive putsch or any terrorist activity.

“We want to protest the kidnapping of people outside Turkey by local mafia groups and MİT, which are exploited by [Turkish President Recep Tayyip] Erdoğan to do his dirty work by violating international law,” the activists said in their statement read both in German and Turkish.

Underlining that the Turkish government has kidnapped a total of 113 people from outside the country so far, the protesters demanded that authorities find İnandı as soon as possible.

On Wednesday Erdoğan told Kyrgyz President Sadyr Japarov during his official visit to Ankara that he had no idea of İnandı’s whereabouts.

Erdoğan’s statement, the first comment made about İnandı’s disappearance by Ankara, contradicts a claim by Orhan İnandı’s wife, Reyhan İnandı, and the family’s lawyer, Taalaigul Toktakunova, who say based on information they received, Orhan İnandı is being held at the Turkish Embassy in Bishkek. They refuse to reveal their source for security reasons.

Although Japarov ordered the State Committee for National Security and the Ministry of Internal Affairs to conduct an extensive search to locate İnandı, he is being criticized by the Kyrgyz for not pushing for an effective investigation to find the missing educator.