[ANALYSIS] How did the Erdoğan government abuse the Seville Map?

In recent years the government of Turkish President Recep Tayyip Erdoğan has used foreign policy to manipulate and shape public opinion in the service of its domestic political goals, so Turkish foreign policy has unfortunately become a tool of domestic politics. Technical foreign policy issues such as the “delimiting of the maritime jurisdiction in the eastern Mediterranean,” which were previously not on the radar of the Turkish public, have become the topics of daily conversation. The Turkish people have been led to believe in the existence of a virtual enemy — referred to only as “foreign powers” and deliberately left ambiguous by the Erdoğan administration – that is trying to usurp their rights in the eastern Mediterranean.

As a result, declaring an opinion on a foreign policy issue that contradicts the narrative imposed on society by the Erdoğan government is sufficient reason for any person in Turkey to be labelled a traitor. One of the most sensitive topics in this regard is the “Seville Map,” which paved the way for implementing the Blue Homeland Doctrine. This doctrine caused the isolation of Turkey in the eastern Mediterranean and hampered Turkey’s rights in the region. So, what is the Seville Map, and what does it mean for the European Union and Turkey?

Background of the Seville Map

In 2007 Juan Luis Suárez de Vivero, a professor at the University of Seville, published a book titled “Atlas de la Europa Maritima”(Atlas of the European Seas). In this book, he also included a map known in Turkey as the Seville Map, which grants Greece an extensive continental shelf in the eastern Mediterranean at the expense of Turkey. However, if one examines the areas that also concern Turkey in the original version of the map, one finds that the maritime jurisdiction areas in the Aegean and the Mediterranean were drawn using the “hypothetical median line [equidistant line]” method. 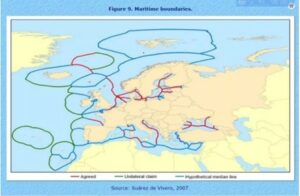 In the English version of the book, under the Seville Map, a note has been added by  Suárez de Vivero:

“The conflict in the Aegean is as old as the rivalry between Turkey and Greece itself. In this case, the equidistant line is so close to the Turkish coast that it leaves the majority of the sea’s jurisdictional waters in the hands of a neighbouring country (Greece). If we then include the proximity of an island-state such as Cyprus in the mix, we see that Turkey’s jurisdictional waters are excessively small, which poses both economic and geo-political problems.”

According to Sinan Ülgen, a Turkish foreign policy expert and a senior fellow at Carnegie Europe in Brussels, by adding this kind of note to the Sevilla Map, Suárez de Vivero has accepted that the delimitation of maritime jurisdictions areas in the Aegean and eastern Mediterranean is controversial and that the use of traditional methods such as the equidistant line in any divisions in these areas will cause problems.

Contrary to what is claimed in Turkey, the Seville Map does not reflect the official position of the European Union. In September 2020 Güven Özalp, the Brussels correspondent for the Hürriyet newspaper asked the EU Commission what the official position of the EU on the Seville Map was and whether this map reflects the EU’s legal stance on maritime jurisdiction in the Mediterranean.

The EU Commission’s response to Hürriyet was, “The reports produced by the institutions are not official EU documents and have no legal or political value for the EU. They are not binding.”

The US Embassy in Ankara tweeted on Sept. 21, 2020 that the United States does not take a position on the maritime borders of other states as part of its global policy and that “With respect to the ‘legal status’ of the Seville map, the US does not consider the Seville Map to have any legal significance.”

Selim Yenel, a retired ambassador to the European Union and one of Turkey’s leading experts on relations with the EU, says in his book “Avrupa Birliği’nin Türkiye Sınavı”(The European Union’s Test on Turkey) that when the Seville Map was published, the Turkish representation to the EU at the time asked the EU Commission if the maritime borders shown on the map reflected the EU’s official position. He wrote that the commission replied that the Seville Map was prepared by a university that didn’t officially represent the EU and that it needed to reflect the official view of the EU.

The truth is that despite the Erdoğan administration knowing full well that the Seville Map is not an EU map, it used the map to create an imaginary enemy and implemented the Blue Homeland Doctrine, which aims to define Turkey’s maritime jurisdiction areas in the eastern Mediterranean and the Aegean Sea by exerting military force if necessary, to exploit the nationalistic feelings of the Turkish people for political purposes. As a result, Turkey has isolated itself in the eastern Mediterranean due to its coercive diplomacy. Turkey has the longest coastline on that body of water, and nobody can imprison Turkey in the Gulf of Antalya. What Turkey needs to do instead of threatening through imaginary enemies and maps is to assume a pioneering role in determining the maritime authority areas in the eastern Mediterranean by means of diplomacy within the framework of equitable principle and international law. The US and the EU will support Turkey in this regard because the establishment of peace and security in the eastern Mediterranean will serve the interests of everyone.