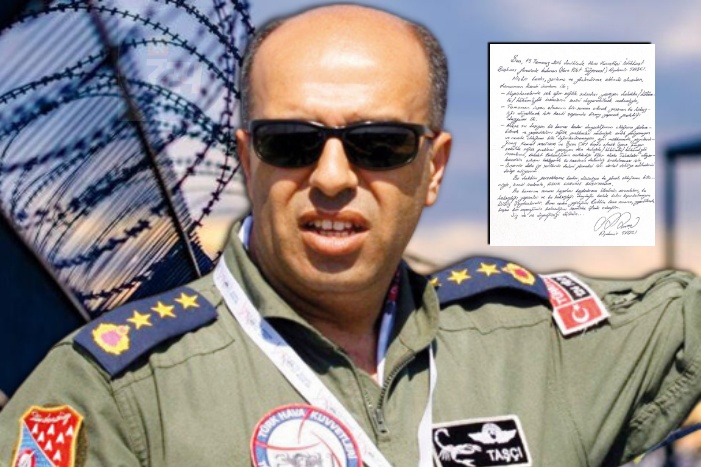 A former brigadier general who was jailed on coup charges following an abortive putsch in Turkey in July 2016 has gone on a hunger strike to draw attention to the neglect of critically ill prisoners, local media reported on Saturday, citing an opposition lawmaker.

Aydemir Taşçı, who was head of Air Force Intelligence at the time of the failed coup, said in a letter to Peoples’ Democratic Party (HDP) deputy Ömer Faruk Gergerlioğlu that he started a hunger strike to make critically ill inmates’ voices heard.

Gergerlioğlu shared the letter in a tweet on Saturday, saying, “… Aydemir Taşçı has started a hunger strike today for sick prisoners. This is the first hunger strike by a July 15 [failed coup] prisoner, following [those staged by] leftist prisoners!”

The HDP lawmaker added that more than 60 critically ill inmates died in Turkish prisons in the past 10 months, which was a “world record.”

Taşçı said in the letter that he demanded the immediate release of sick prisoners, in particular Kemal Mutlum and Özcan Çay, who are facing charges identical to his and can no longer walk or determine where they are due to health problems, so they can have access to proper healthcare.

“… Although I know it’s a sin in our religion, I’m starting a hunger strike. If I die as a result of this decision, the ones responsible for my death are those who did this injustice and those who … didn’t move a finger even though they heard about this injustice. If my God asks me why I did this, I will tell him that I had no other choice. Think about what you’re going to say, too!” Taşçı added.

Human rights activists and opposition politicians have frequently criticized authorities for not releasing critically ill prisoners so they can seek proper treatment.

Gergerlioğlu, also a human rights defender, previously said critically ill political prisoners were not released from prison “until it reaches the point of no return.” He depicted the deaths of seriously ill prisoners in Turkey who are not released in time to receive proper medical treatment as acts of “murder” committed by the state.

According to the most recent statistics published by the Human Rights Association (İHD), the number of sick prisoners is in the thousands, more than 600 of whom are critically ill. Although most of the seriously ill patients have forensic and medical reports deeming them unfit to remain in prison, they are not released. Authorities refuse to free them on the grounds that they pose a potential danger to society.