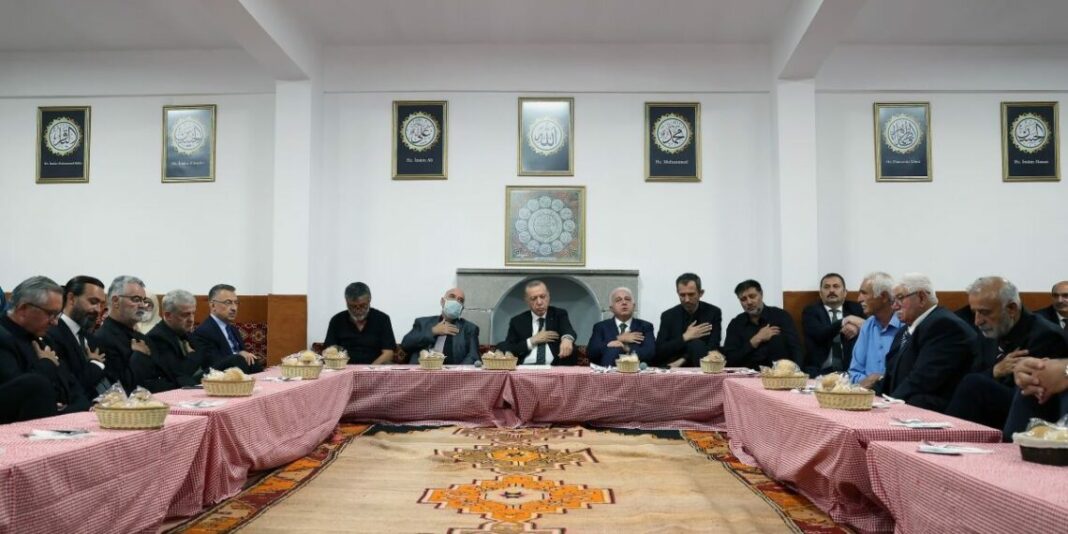 Pictures of Alevi imams were removed from an Alevi house of worship (cemevi) during a visit by Turkish President Recep Tayyip Erdoğan, sparking controversy, the Stockholm Center for Freedom reported, citing the Cumhuriyet daily.

Erdoğan visited the Hüseyin Gazi Cemevi in Ankara on Monday, after an Alevi leader was beaten in front of his house and five cemevis were vandalized over the course of a week. During the visit Erdoğan promised the perpetrators would be held accountable.

However, the cemevi’s spiritual leader, Hüseyin Öz, said there had been no meaningful discussion during the meeting, and he felt his congregation had been used for political gain.

Öz added that Ali Arif Özzeybek, an advisor from the Ministry of Interior, had suggested taking down the photos of Alevi imams. “The cemevi is undergoing renovation, and he said it would be better if the pictures were taken down. I don’t think they were taken down because of the president’s visit,” he said.

The pictures were put back up shortly after Erdoğan departed. While in the cemevi Erdoğan sat in the seat that is usually reserved for the spiritual leader, which sparked further controversy.

“Moreover, none of the problems Alevi communities face were discussed during the visit. They did not even refer to cemevis as houses of worship,” he said.

This disappointment was reiterated by other members of the community who attended the meeting.

“We requested that cemevis be officially recognized as houses of worship so we can benefit from state subsidies,” said Öz. “I hope our requests will be met in the future.”

Incorporating Shiite, Sufi, Sunni and local traditions, Alevism is a strain of Islam that emerged in the Middle Ages. Alevis are estimated to constitute between a tenth and a fifth of the Turkish population.

Turkey has long denied the demands of Alevis for state recognition, and cemevis are not officially recognized by the state.

There are long-standing tensions between the Alevi and Sunni communities in Turkey. During the Turkish republican era, hundreds of Alevis were killed in pogroms, which many now believe were masterminded by groups inside the state, in the cities of Çorum, Yozgat and Kahramanmaraş in the 1970s.