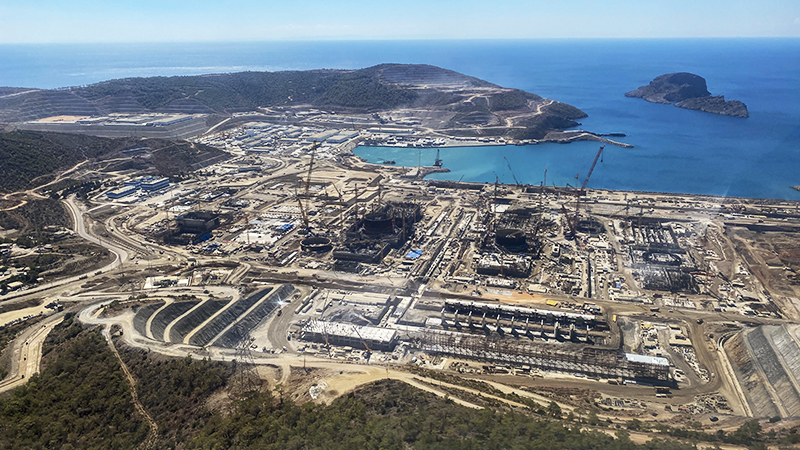 Up to 50 missing after migrant boat sinks off Greece

A Russian state-owned company is transferring money to a subsidiary that is building a $20 billion nuclear power plant on Turkey’s Mediterranean coast, alleviating concerns the project could be delayed by war sanctions, Bloomberg reported.

Rosatom Corp. last week sent around $5 billion to the Turkey-based builder, formally known as Akkuyu Nuclear JSC, with two other similar dollar transfers planned for this week and next, according to senior Turkish officials with direct knowledge of the matter.

Rosatom said in a statement although the construction site is the largest of its kind worldwide, “current transactions are significantly lower” than the figure provided by the Turkish officials.

Financing arrangements for the project are private, according to Rosatom, which declined to provide further details.

The power plant is considered critical for Turkey if it’s to satisfy ever-growing energy needs, slated to meet 10 percent of the country’s domestic electricity demand once all four reactors become operational. Russia and Turkey have economic ties going back decades, and Turkish President Recep Tayyip Erdoğan has been careful not to alienate the Kremlin since Russian troops invaded Ukraine.

The project has received finance from Russia’s biggest lender, Sberbank PJSC, which has been sanctioned by the US and European Union, and also from Sovcombank, also sanctioned.

Rosatom, the sole owner of the Turkish project, and its subsidiary that’s building plant haven’t been sanctioned.

An Akkuyu Nuclear JSC representative did not comment. Turkey’s Ministry of Treasury and Finance declined to comment.

The financing will cover all procurement needs for the Akkuyu project over the next two years, the Turkish officials said, asking not to be identified due to the sensitivity of the issue.

Work on the first reactor, known as Akkuyu 1, began in 2018, with engineers starting on Akkuyu 2 two years later. Work is scheduled to be completed by 2026.

One of the officials described the transfers as a goodwill gesture by Russia’s Vladimir Putin for Erdoğan’s role in a landmark deal that’s expected to unlock grain exports out of Ukraine and eased concerns of a global food crisis. The two leaders are due to hold talks in Sochi on Aug. 5.