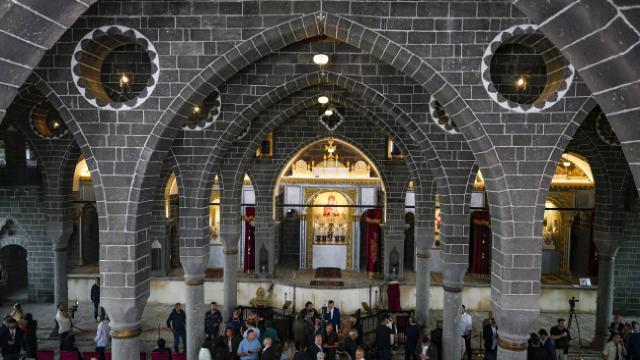 An Armenian church in Turkey’s southeastern Diyarbakır province that was severely damaged during clashes in the area between the outlawed Kurdistan Workers’ Party (PKK) and Turkish security forces in 2015 has been officially reopened after seven years of an extensive, government-funded restoration.

After a seven-year hiatus at the Surp Giragos Armenian Church in the Sur district, which was built in 1376 and is said to be the biggest Armenian church in the Middle East, the bell was rung, a blessing was given, candles were lit and prayers were performed, Turkish media reported over the weekend.

The opening ceremony of the renovated church saw the attendance of Culture and Tourism Minister Mehmet Nuri Ersoy, main opposition Republican People’s Party (CHP) deputy Sezgin Tanrıkulu, Diyarbakır Governor Münir Karaloğlu and Sahak Mashalian, the patriarch of Turkish Armenians, along with many Armenians from Turkey and abroad on May 7, according to local media reports.

During a speech at Saturday’s event, Mashalian called the opening of the church a “lifeline” for Diyarbakır’s Christian population, adding that it contained an important and meaningful message of friendship for the Armenian world in terms of the development of Turkish-Armenian relations.

“We have to see this church, which was opened for worship, as a monument of good neighborly relations between Armenians, Turks and Kurds, Christians and Muslims,” he said.

Minister Ersoy also said the restoration of the Surp Giragos Armenian and Mar Petyun Chaldean churches cost approximately TL 32 million ($2.14 million) and was funded by the Environment, Urbanization and Climate Change Ministry under the coordination of Turkey’s General Directorate of Foundations.

Various cultures and faiths live together in peace and worship freely in Diyarbakır, which is home to many priceless structures, Ersoy said, adding, “We believe that the places of worship all over Anatolia are signs of respect and fellowship among us.”

Turkish authorities had conducted direct talks with Abdullah Öcalan, the jailed leader of PKK, for over two years until the summer of 2015, when the death of two police officers near the Syrian border became the official reason for their collapse.

Since then, there have been continuing clashes between the PKK, listed as a terrorist organization by Turkey, the US and the EU, and Turkish security forces. More than 40,000 people, including 5,500 security force members, have been killed in four decades of fighting between the Turkish state and the PKK.