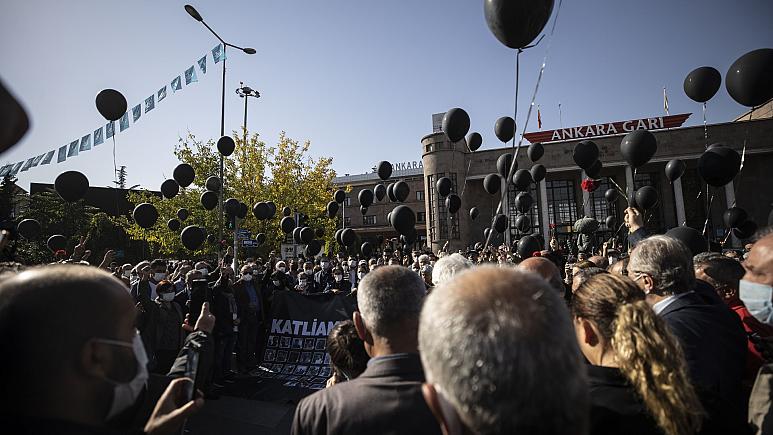 Turkish police on Sunday dispersed people who had gathered in Ankara’s Ulus district to commemorate the victims of a 2015 terrorist attack near the capital’s train station and detained 22 people, Turkish media reported.

A group including relatives of the victims gathered in front of the subway station in Ulus, intending to march to the train station to commemorate the victims. The protesters were warned by the police that a protest was prohibited due to pandemic restrictions.

The police then deployed tear gas to disperse the group and detained 22 protesters.

The Ankara train station bombings that took place on Oct. 10, 2015 were the deadliest such attack in Turkey. The blasts took place near the city’s central train station as people from mainly leftist and pro-Kurdish groups gathered to stage a demonstration demanding peace and an end to the ongoing conflict between the outlawed Kurdistan Workers’ Party (PKK) and the Turkish government.

Two explosions went off as people were congregating in the square, killing more than 100 and injuring some 400.

The police took heavy security measures on the streets leading to the train station ahead of the commemoration, held by relatives of the victims and several civil society organizations, who were carrying photographs of the victims and placards reading, “We will not let the massacre of October 10 be forgotten.”

Relatives of the victims laid red carnations at the October 10 Monument and released black balloons into the sky.

Mehtap Sakinci Coşgun, head of the October 10 Association, said public officials accused of negligence in the massacre have not yet been tried. “Those who conceal the perpetrators of these crimes against humanity are accomplices in those crimes,” she said.

The last hearing in the trial took place on Aug. 3, 2018, with the 19 people handed down prison sentences ranging from seven years to aggravated life.

Government officials said the Islamic State in Iraq and the Levant (ISIL) was responsible for the bombings, but victims’ families demanded to know if the attack could have been prevented by the authorities.

Emin Koramaz, board chairman of the Turkish Union of Engineers and Architects Chambers (TMMOB), delivered a speech during the ceremony criticizing the Ankara governor for removing the “trees of mourning” installed in the area on Saturday by the Ankara Metropolitan Municipality in memory of those who died in the attack.

“I remember with respect and mercy our citizens who were singing songs of fraternity when they lost their lives in the terrorist attack of October 10 in Ankara. I condemn once again the terror and collaborator of terror. We have not forgotten it, and we will not let it be forgotten,” main opposition Republican People’s Party (CHP) leader Kemal Kılıçdaroğlu tweeted.

A report drafted by the Interior Ministry had found that some public officials bore some responsibility for the incident. According to the report, which was leaked to the media, intelligence that ISIL might stage an attack on gatherings by leftist and Kurdish groups in Ankara and other cities had been conveyed to the police. Moreover, the names of the train station bombers had also been mentioned several times in these intelligence notices. This information, however, had not been taken into consideration by law enforcement.

Despite demands from the victims’ lawyers, the parties who failed to heed the intelligence warning have not been brought to justice.