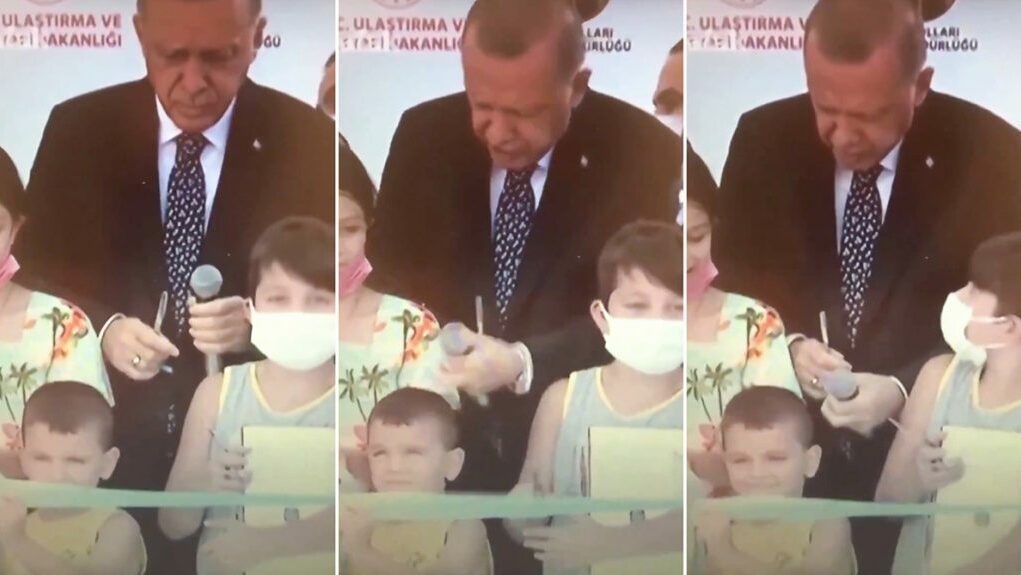 Turkish President Recep Tayyip Erdoğan unleashed a flood of criticism, shock and anger when he rapped a child on the head for cutting the ribbon too early at an opening ceremony in Turkey’s Black Sea region over the weekend.

The incident, which took place on Saturday in the Black Sea province of Rize, also Erdoğan’s hometown, was recorded on camera.

Erdoğan was in Rize for the inauguration of a tunnel. He was on the podium with government officials and children when one of the children, a boy aged around 6 or 7, in front of Erdoğan cut the ribbon too early with some scissors he had previously been given.

The president was quick to react and rapped the boy on the head and said something inaudible.

The video went viral on social media, with many criticizing his response to the child, while pro-government media outlets described the exchange as a “lovely” moment from the ceremony.

Professor Talat Kırış, a brain surgeon and a contributor to the T24 news website, wrote that if the incident had taken place in a democratic country, that politician would have been thrown out of office. The professor said Erdoğan’s reaction to the boy is not one that can be ignored.

“Perhaps he is no longer able to bear his burden. His reaction even to a small problem was over the top. This is a dangerous situation not only for his health but for the future of the country. As a doctor, I advise him to get some rest, relax and get some anger management training,” wrote Kırış.

Republican People’s Party (CHP) lawmaker Tuncay Özkan expressed anger at Erdoğan on Twitter, saying: “What are you doing? This is unacceptable. You can’t treat children like that. It doesn’t matter who you are.”

Another opposition party politician, Homeland Party leader Muharrem İnce, who ran against Erdoğan in the 2018 presidential election, was also critical of the president. “Protect your children from Erdoğan. There’s a remedy for every problem in life, but there’s no remedy for a lack of love. I would refer Erdoğan, who fails to show love to children, hits them on the head and rebukes them for having long hair, to a doctor.”

İnce was referring to Erdoğan’s remarks to another boy at the ceremony who was rebuked by the president for having a ponytail.