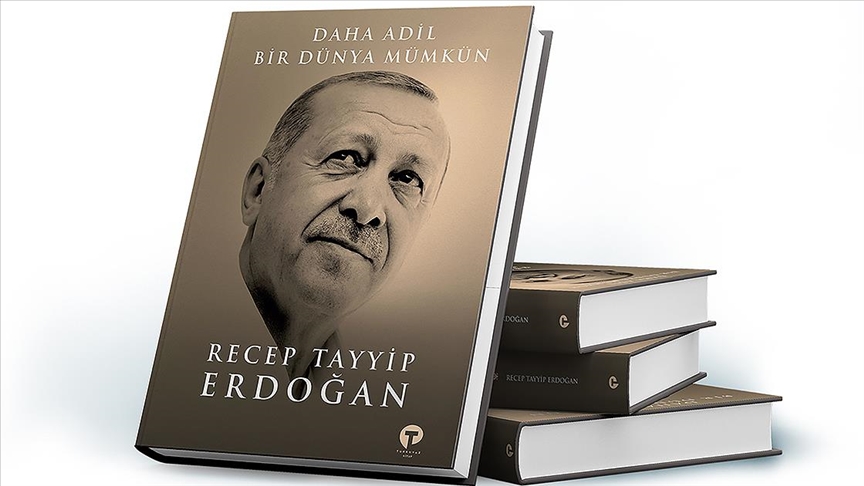 At a time when Turkey is harshly criticized for gross human rights violations, a book written by Turkish President Recep Tayyip Erdoğan in which he talks about injustice around the world and how Turkey is working to address it hit the shelves on Monday.

The book, titled “Daha Adil Bir Dünya Mümkün” (A Fairer World Is Possible), was published by Turkuvaz Kitap, a subsidiary of Turkuvaz Media Holding, which has close ties to Erdoğan and his ruling Justice and Development Party (AKP). The book can be purchased for TL 40 ($4.82) at bookstores and TL 32 ($3.86) online.

Fahrettin Altun, Erdoğan’s communications director, tweeted on Sunday that Erdoğan’s book will be available to readers on Monday, adding: “We are very excited. Erdoğan has put a lot of effort into writing this book, which above everything else, offers a concrete proposal for the restructuring of the United Nations.”

According to the communications directorate website, Erdoğan points to global political dilemmas, particularly injustice, the refugee crisis, international terrorism and Islamophobia in his book and exposes discrimination and double standards in the world, giving the United Nations’ current structure as an example.

“President Erdoğan underlines the need for comprehensive reform, especially in the United Nations Security Council, in the book, where he also draws attention to the problems of legitimacy, functionality, effectiveness, inclusiveness, representation and governance of the United Nations,” according to the website.

“In a world where children die and are killed, no one is innocent. … Justice is one of the most urgent issues on the global stage today. Institutions responsible for establishing global justice are unfortunately in a state of inertia. … In an era in which mercy has been lost, we have the responsibility to be the representatives of justice and the voice of conscience,” Erdoğan says in his book.

All proceeds from the book, which is being translated into English, Arabic, German, French, Russian and Spanish, will be donated to Turkey’s Disaster and Emergency Management Presidency (AFAD), according to the communications directorate website.

Yet, Erdoğan was quick to attract criticism over to his book, with many accusing him of hypocrisy and talking about achieving justice and peace in the world when people are subjected to great injustices in his own country.

“Those who wrote the book of injustice are saying, ‘A fairer world is possible.’ Actions speak louder than words,” tweeted Hüda Kaya, a lawmaker from the pro-Kurdish Peoples’ Democratic Party (HDP), pointing to the discrepancies between Erdoğan’s book and his actions.

Erdoğan, who launched an all-out war on his critics and non-loyalist citizens following a coup attempt in July 2016 under the pretext of an anti-coup fight, has been facing harsh criticism for cracking down on dissent, jailing his critics, silencing the opposition media and creating a one-man rule in Turkey.

Erdal Aksünger, a former lawmaker from the main opposition Republican People’s Party (CHP), tweeted: “Erdoğan is said to have written a book. The name of the book is ‘A Fairer World is Possible.’ I wonder how could he find time to write a book as someone who had said, ‘I don’t have time to read books. Friends give me summaries.’ Or he gave a summary, and the friends wrote it.”

Aksünger was referring to a statement Erdoğan made in 2013 when he was prime minister. Erdoğan had told journalist Cüneyt Özdemir during an interview that he had no time to read books and that his staff gave him summaries of popular books.

Journalist Fatih Portakal also expressed doubt over the possibility of Erdoğan writing a book, tweeting: “I wonder if he actually made time to write this book. I don’t think so. I’ll get it and read it. I’ll try to understand what kind of a fair order will be brought to the world in a country where injustice is a style of governance.”