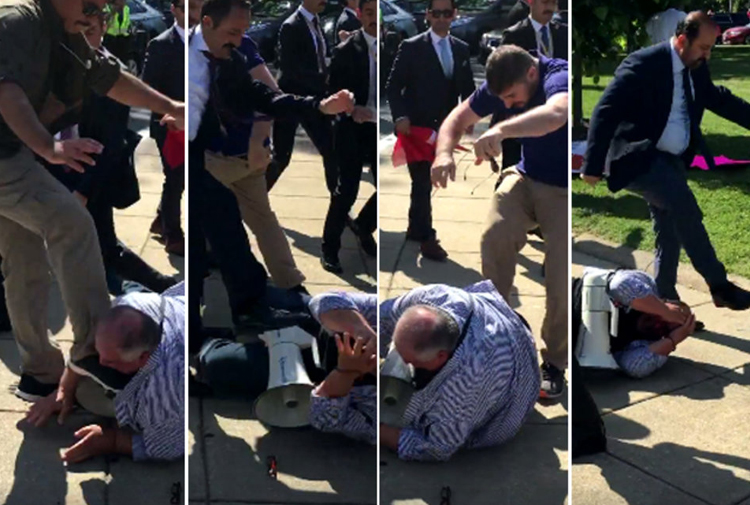 A US district appeals court in Washington, D.C., has rejected Turkish government motions to dismiss two lawsuits filed by protesters who were attacked by Turkish President Recep Tayyip Erdoğan’s security guards in May 2017, local media reported on Wednesday.

The cases against Erdoğan’s guards stem from an altercation on May 16, 2017, outside the residence of the Turkish ambassador in Washington. Demonstrators, mostly ethnic minorities of Kurdish and Yazidi descent, protesting the policies of the Turkish president were attacked by his bodyguards during a visit by — and within view of — Erdoğan.

The D.C. Circuit Court of Appeals on Tuesday decided to allow both cases filed on behalf of over a dozen plaintiffs, the victims of Erdoğan’s bodyguards’ attack, to proceed, upholding the district court’s decision of February 2020 that Turkey isn’t entitled to immunity under the Foreign Sovereign Immunities Act.

Turkey alleges that the demonstrators posed an imminent threat to Erdogan’s safety, but video footage shows Turkish authorities and pro-Erdoğan supporters running to attack the protestors, surrounding women and elderly men while punching, kicking and throwing them to the ground.

“In its brief, the United States declares that no source of positive law explicitly grants Turkey the authority to use physical force in the protection of diplomats on U.S. soil,” the court said in a 29-page ruling reported by the Ahval news website, rejecting Turkey’s argument that it was acting within its own security interests.

The US court’s decision represents a key victory for the victims, who saw federal criminal charges against over a dozen Turkish security officers largely dropped by the Department of Justice under the Trump administration a year after the assault, in March 2018, which coincided with the return to the US of an American pastor held in a Turkish prison.

“Despite Turkey’s continued efforts to delay justice, thus far each level of review confirms the obvious, that Turkey attacked innocent protesters,” The Hill on Tuesday quoted Andreas Akaras, of the Bregman, Berbert, Schwartz & Gilday law firm and lawyer for the plaintiffs, as saying.

Akaras also spoke to Ahval, saying the victims of the attack “welcomed very much the Joe Biden administration’s position that Turkey must be held accountable, and, so too, the demands of leading members of the House and Senate that Turkey face American justice.”

“Turkey will be held to account for its violent and oppressive actions carried out on American soil,” Akaras added.