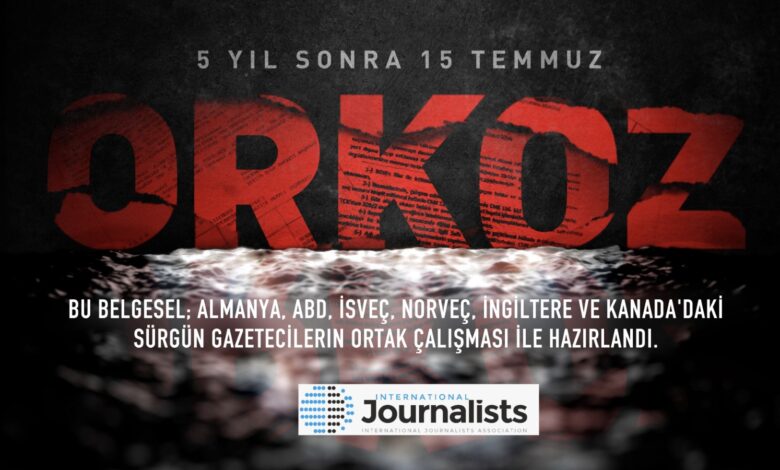 A documentary challenging Ankara’s official narrative regarding what happened on the night of a coup attempt in Turkey in July 2016 has been age-restricted by YouTube due to spam reports by pro-government trolls, according to the director who spoke to Turkish Minute.

A controversial military coup attempt took place in Turkey on the night of July 15, 2016 which, according to many, was a false flag aimed at entrenching the authoritarian rule of President Recep Tayyip Erdoğan by rooting out dissidents and eliminating powerful actors such as the military in his desire for absolute power.

Titled “Orkoz,” the documentary presents statements from military officers, politicians, journalists and civilians related to the coup attempt, showing that Erdoğan and his ruling Justice and Development Party (AKP) have purposefully blocked attempts to shed light on the event for the past five years.

Orkoz is the name of a strong undertow in the Bosporus Strait that can cause damage, a reference to the starting point of the coup attempt on the night of July 15, 2016 with the blockade by soldiers of the two bridges over the Bosporus.

Journalist Bedrettin Uğur, who directed the documentary with the contribution of journalists living in exile in Germany, the US, the UK, Sweden, Norway and Canada, says the YouTube’s age restriction on the documentary was triggered by spam reports from pro-government trolls, which number some 6,000 according to a Freedom House report, and is due to Erdoğan’s unwillingness to let journalists investigate the abortive putsch.

“Journalists who tried to investigate the July 15 [coup attempt] were either arrested or forced to flee the country,” Uğur said. “‘Orkoz’ was an important initiative to shed light on the coup attempt. The regime [the Erdoğan government] stepped in to prevent it from reaching people and through the use of its army of trolls numbering 6,000 and efforts at the level of YouTube’s Turkey [liaison] office our video got age restricted.”

Uğur says the documentary has no content requiring it to be blocked for people younger than 18.

“The age restriction obliges an ID verification for the viewer to access the content. In present-day Turkey, no one would give away their identity to watch a documentary challenging the official narrative. Let’s not forget that this is a country where, just for retweeting a news story, [lawmaker] Ömer Faruk Gergerlioğlu was stripped of his parliamentary status and subsequently jailed. This is censorship plain and simple.”

Uğur says YouTube should avoid being a censorship apparatus of authoritarian regimes.

“On the first day 150,000 people watched the documentary on YouTube. The ID verification requirement stopped this [viewership]. This illustrates the extent of fear on the part of the regime about the possibility of the truth prevailing.”

The law, which concerns YouTube, Facebook, Twitter, Instagram and TikTok, went into effect at the beginning of October and sets forth progressive sanctions forcing social media platforms with more than 1 million connections a day to appoint a representative in Turkey with whom the Turkish authorities can resolve problems arising from cases of insult, intimidation and violation of privacy.

The bill was criticized by human rights defenders and critics including Amnesty International, Human Rights Watch, Reporters Without Borders and the UN, who expressed their concerns over the government’s move.