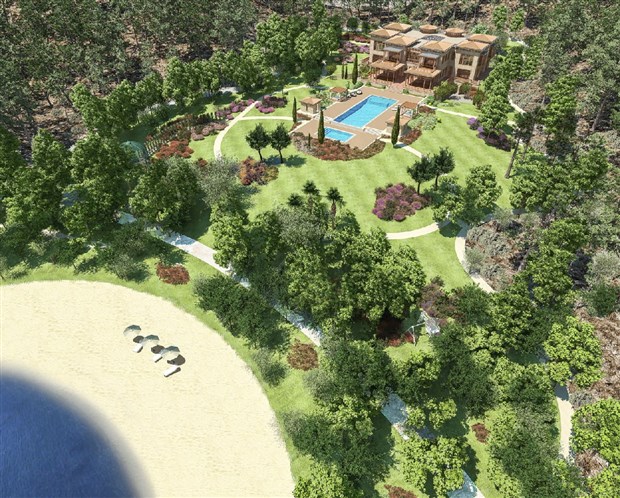 The photos were posted by Şefik Birkiye, a Turkish-Belgian architect. The construction of the Okluk State Guesthouse in the popular holiday resort of Marmaris was completed in 2019, but no photos were shared with the public at the time.

The guesthouse campus was built near Okluk Cove at a cost of TL 640 million between 2018 and 2021 to replace the summer residence that had been constructed during the term in office of the late President Turgut Özal in the 1980s.

Encompassing some 85,000 square meters, the campus has five buildings as well as three blocks of residential buildings for staff.

A beach has been created with a 10,966-square-meter landfill, featuring bungalows and docks.

The construction of the summer mansion was undertaken by Rönesans Holding, which had constructed the presidential complex in Ankara, and was completed in secrecy.

The mansion is rumored to have 300 rooms.

A number of guests have stayed at the complex, including Albanian Prime Minister Edi Rama and Azerbaijani President Ilham Aliyev.

Architect Birkiye was the architect of Erdoğan’s presidential complex in Ankara. He has designed seven mosques, including a mosque built in İstanbul’s Taksim Square as well as the Bizim Mahalle (Our Neighborhood) project funded by the Emlak Konut Real Estate Investment Company in Halkalı and the central bank building in the İstanbul Finance Center.