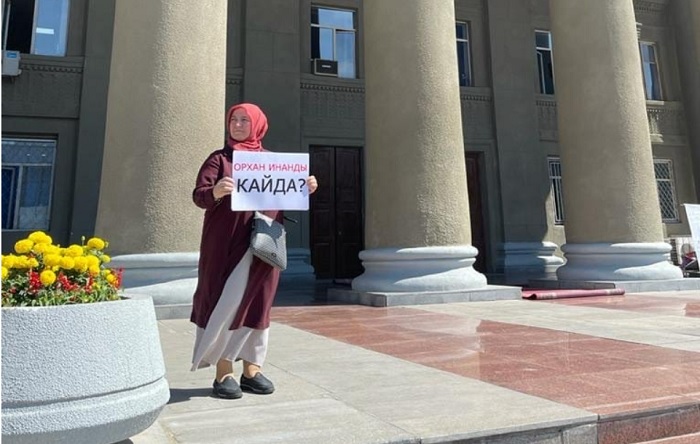 The wife of a Turkish-Kyrgyz educator feared to have been abducted by Turkish intelligence began a “justice watch” in front of the Kyrgyz presidential place on Monday, demanding that her husband be found, the TR724 news website reported.

Reyhan İnandı, the wife of Orhan İnandı, founder of the Sapat schools in Kyrgyzstan, is staging a solitary protest in the front of the palace of Kyrgyz President Sadyr Japarov to urge authorities to exert greater efforts to locate her husband.

“As of today, I am beginning my justice watch. May God help me. May all those who have gone missing be found. I refer all the tyrants and their cronies to God,” Reyhan İnandı tweeted after launching her protest.

Reyhan İnandı will stand for one hour every day holding a placard asking where her husband is, reminiscent of a three-month protest staged by Aigul Japarova, the wife of Kyrgyz President Japarov, after he was jailed.

Japarov had been behind bars for three and a half years, during which time his parents and son had died. He was elected president for a six-year term 97 days after he was released from prison.

Orhan İnandı went missing in Bishkek on the night of May 31 and is allegedly being held against his will in the Turkish Embassy in Bishkek due to his alleged links to the Gülen movement.

Since June 1, protests have been taking place in Bishkek and major capitals around the world including Washington, Berlin, London and Brussels in support of the Turkish educator, demanding his release. The United Nations Human Rights Committee has called on Turkey to promptly take all measures necessary to establish the whereabouts of İnandı and said the government should ensure that İnandı would not be subjected to torture and inhuman treatment, guarantee his physical and mental integrity and immediately place him under the protection of the law.

Rights organizations have also asked Kyrgyz authorities to exert efforts for the release of İnandı. Human Rights Watch (HRW) called on Kyrgyz authorities to investigate the disappearance of İnandı and “ensure his safety and that he is not unlawfully removed to Turkey.” According to HRW, allowing İnandı’s rendition to Turkey would violate Kyrgyzstan’s obligations under the Convention against Torture and Other Cruel, Inhuman, or Degrading Treatment or Punishment, which it ratified in 1997.