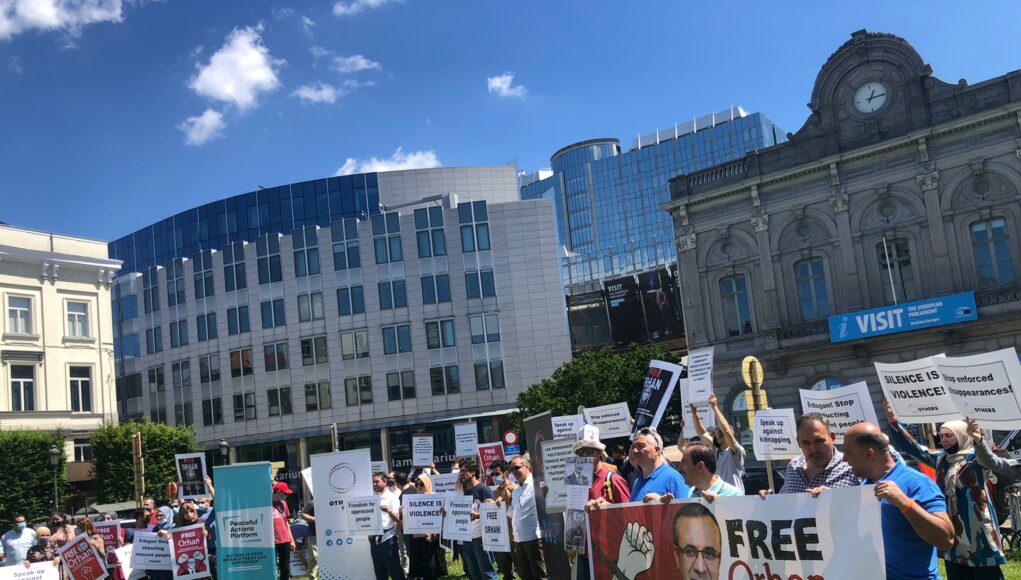 Dozens of human rights activists gathered in front of the European Parliament in Brussels on Thursday to call on European authorities to help find a Turkish-Kyrgyz educator in Kyrgyzstan who is feared to have been abducted by Turkey.

In addition to ongoing protests in Bishkek where Orhan İnandı, the founder and and president of the Turkish-Kyrgyz Sapat school network operating in Kyrgyzstan went missing on May 31, a protest was also held in Brussels to raise European politicians’ awareness about the case of İnandı, who is feared to have been abducted by Turkey’s National Intelligence Organization (MİT) due to his alleged links to the Gülen movement.

Turkey claims the founder of the school network is Turkish Islamic cleric Fethullah Gülen, whose movement is accused by the Turkish government of masterminding a failed coup in Turkey in July 2016. The movement strongly denies any involvement in the abortive putsch or any terrorist activity.

A statement read out by one of the protestors in Brussels said İnandı’s case recalls the case of Saudi journalist and dissident Jamal Khashoggi, who went to the Saudi Consulate General in İstanbul in October 2018 and was brutally murdered by Saudi operatives.

“There is only one difference now. It is not yet too late to take action [to save İnandı],” said the protestor, adding that the international community should not show tolerance for Turkey’s unlawful actions abroad.

The protestors called on European authorities to take immediate action to ensure İnandı’s safe return to his family.

In the meantime, the Italian Federation for Human Rights released a statement on Twitter on Thursday calling on Kyrgyzstan to investigate the disappearance of İnandı and prevent his possible deportation to Turkey where he risks torture and unfair trial on false terrorism charges.

“Extraditing İnandı would be a blatant violation of Intl. Convention against Torture that prohibits the extradition of anyone to a place where he or she would be at risk of torture,” the federation warned.

🔴 Kyrgyzstan should investigate the disappearance of Orhan #İnandı, a dual Turkish-Kyrgyz citizen abducted in capital Bishkek on May 31, allegedly detained in 🇹🇷 Embassy, and prevent his deportation to🇹🇷where he risks torture and unfair trial on false terrorism charges.
(Thread) pic.twitter.com/dlIY6KmEuU

Although Kyrgyz President Sadyr Japarov ordered the State Committee for National Security and the Ministry of Internal Affairs to conduct an extensive search to locate İnandı, he is being criticized by the Kyrgyz for not pushing for an effective investigation to find the missing educator.

Locals have been protesting since the suspicious disappearance of İnandı in the hope of finding İnandı. The protests mostly take place in front of the Turkish Embassy building where İnandı is believed to be held and the parliament and presidential buildings in Bishkek.