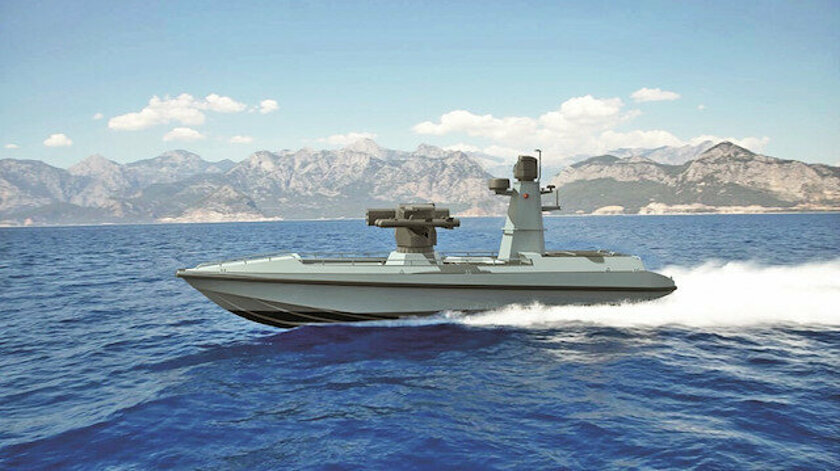 Faced with the risk of losing the upper hand in the Aegean to neighboring Greece, Turkey is investing in its marine capabilities and has launched ULAQ, the country’s first armed unmanned combat vessel, as part of its efforts to reinforce its naval power. With a cruise range of 400 kilometers, the vessel is intended for use in assault and intel missions.

Turkey lost its role in the joint international program to manufacture F-35 stealth fighter jets and was blocked by Washington from modernizing its fleet of F-16s due to its purchase of a Russian-made S-400 missile defense system. To make a bad situation worse, Greece recently struck a deal with France for the purchase of 18 Rafale warplanes, scheduled to be delivered by 2023. Athens also sent a letter of intent to the US in November 2020 for the purchase of 24 F-35s.

Turkey’s focus on the sea

Locked in a decades-long rivalry with Greece over the Aegean Sea, Turkey has been undertaking efforts to bolster its naval power in the face of adverse developments in the air. Unmanned vessel ULAQ is the latest vessel to join the navy.

Manufactured domestically by the ARES Shipyard and Meteksan Savunma and delivered to the Turkish Navy, ULAQ is the country’s first unmanned sea vessel. Utku Alanç, director of ARES, and Selçuk Alparslan, the head of Meteksan, released a joint statement that read, “Our goal now is to finalize rocket artillery tests and proceed to guided missile tests.” The statement also said that “some of Turkey’s allies” were also interested in the ULAQ project.

The vessel has a cruise range of 400 kilometers, a maximum speed of 65 kilometers per hour and night vision. It is planned to be used in missions involving reconnaissance, observation, intelligence, above-surface combat, asymmetrical warfare and escort.

Equipped with a 2.75-inch laser-guided quadruple missile as well as a double laser-guided armor-piercing long-range missile, the vessel’s tests are scheduled to be completed in the first quarter of 2021. It will also be capable of coordinating with the air force.

With its bids to purchase F35s and aircraft carriers blocked over political tensions, Ankara has been gravitating towards low-tech unmanned air and sea vehicles. It currently has a total of 140 armed drones which are or have been used in extraterritorial conflicts in Libya, Nagorno-Karabakh and Syria and domestically against the outlawed Kurdistan Workers’ Party (PKK). The navy aims to increase its unmanned vehicles in order to become able to conduct swarm attacks.

Ships made for F-35 idle

Turkey had built the TCG Anadolu, a 28-ton, 232-meter amphibious assault ship capable of carrying on deck six F-35s, 14 helicopters and two armed drones, which became idle after the country’s removal from the F-35 program. Ankara was planning to rely on the TCG Anadolu to project naval superiority in the Aegean and the Mediterranean.