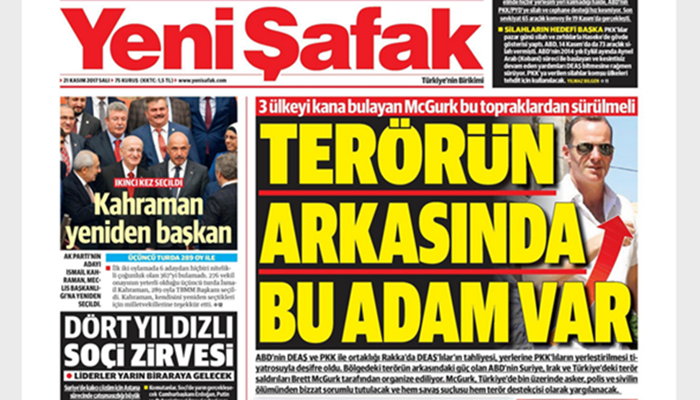 Yeni Şafak, a staunch supporter of President Recep Tayyip Erdoğan, on Tuesday accused Brett McGurk, the US special presidential envoy for the Global Coalition against ISIL (Islamic State in Iraq and the Levant), of organizing terrorist attacks in Syria, Turkey and Iraq.

“The terrorist attacks of the US, which is behind the terror in the region, in Syria, Iraq and Turkey, have been organized by Brett McGurk. McGurk will be held responsible for the deaths of over a thousand soldiers, police officers and civilians and will be tried for war crimes and support of terrorism,” the daily said in its lead story.

The daily claimed that the US is a partner of both ISIL and the outlawed Kurdistan Workers’ Party (PKK), saying that what happened in Syria’s Raqqa is explicit evidence of this cooperation.

Speaking to the daily, Mehmet Güner, chairman of the Association of Families of  Martyrs, said he is ready to sue McGurk.

The Yeni Şafak daily on Sunday said NATO plans to attack Turkey in 2018.
In its lead story, the daily claimed that a recent NATO enemy chart scandal during a drill in Norway was part of the alliance’s planned attack on Turkey.

The image of Atatürk, the founder of Turkey, was displayed by a technician as a target during a NATO military exercise in Norway held between Nov. 8 and Nov. 17. In a second incident an alliance officer posted defamatory comments about Erdoğan on an intra-NATO social media site. The technician and the military officer were later sacked, and Ankara withdrew 40 soldiers from the drill.

“The real scenario is to show Turkey as an enemy of NATO by spreading fabricated views about President Erdoğan. Make Erdoğan a target in NATO countries by showing Turkey as being against NATO. And conduct an operation like July 15 [coup attempt] in Turkey in 2018 with Feto [a derogatory term coined by the ruling Justice and Development Party (AKP) to refer to the Gülen movement] and the US.”

The daily also claimed that the US and NATO used the F35 jets purchase to stop Turkey from buying a Russian S-400 air defense system. If the F35 jets are not delivered to Turkey on time, Ankara will respond by removing the AN-TPY 2 radar that was set up in Malatya province in 2012 as part of a NATO missile defense system.