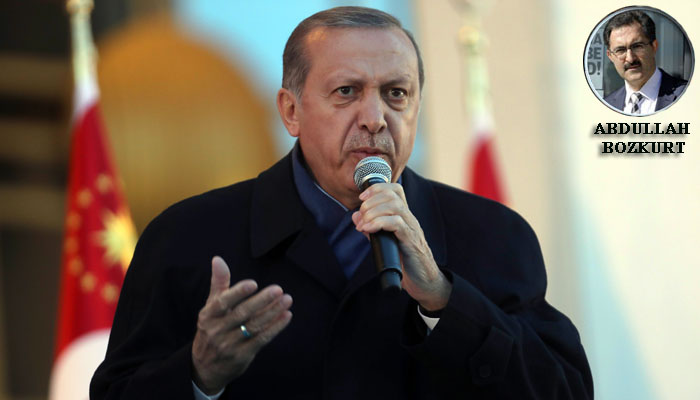 A vicious campaign launched by Turkish President Recep Tayyip Erdoğan against the US Justice Department’s Drug Enforcement Administration (DEA) stems from the fact that a massive corruption investigation in a multibillion-dollar scheme that was made public on Dec. 17, 2013 which incriminated him and his family members had in fact originated from a drug bust on the Turkish border in 2007.

In an unprecedented move, the Erdoğan government orchestrated a baseless criminal prosecution against DEA employees by jailing Metin Topuz, a long-time employee of the US Consulate General in Istanbul who had worked for the DEA for years, putting his family members in police detention. As if that were not enough, Erdoğan ordered his media empire to target DEA agents Jason Sandoval and Mitchell Matthias, who worked out of the US mission in Turkey as part of law-enforcement cooperation with their counterparts in the Turkish police department. Pictures of Sandoval and Matthias were plastered all over Erdoğan’s newspapers, and CCTV video footage of them meeting with Turkish police chiefs was broadcast on pro-government stations. They were declared spies who wanted to take down Erdoğan in a major conspiracy.

Behind all this noise and smoke lies Erdoğan’s sinister plan to try to blackmail the US Justice Department to contain the damage and fallout from the upcoming trial of Iranian sanction-buster Reza Zarrab, who was indicted by federal prosecutors in New York and will soon go on trial. Having been closely involved with this naturalized Turkish citizen of Iranian origin, the Turkish president is afraid of negative repercussions and hopes that the federal case, which also names his former economy minister Zafer Caglayan, Turkish state-lender Halkbank employees and others, won’t go too far.

The very elaborate and detailed Dec.17 graft probe was in fact originally called a drug trafficking and money laundering investigation. This was clearly laid out in the indictment filed by prosecutors with the court along with overwhelming incriminating evidence against Erdoğan’s associates. In fact this information was publicly announced by main opposition Republican People’s Party (CHP) leader Kemal Kilicdaroğu in May 2014, who said the corruption investigation was launched on Feb. 12, 2007 when customs and police officers raided a truck at the Kapikule border gate in Edirne. During the search, police seized 202 kilograms of heroin stashed in coffins in the back of the truck. The public prosecutor’s office in Istanbul launched a criminal investigation under case file number 2007/1258, and people who were suspected of involvement in drug trafficking were put under surveillance.

The investigation led the police to identify members of the Happani drug family, which runs not only drug trafficking but also very comprehensive money laundering schemes from Iraq and Iran to Turkey, Europe and Russia. The report filed on March 6, 2011 by the financial crimes unit of the Anti-Smuggling and Organized Crime Bureau revealed the results of the 2007 investigation. According to the report, a huge amount of money was moved across borders by Happani family members who were working with shell companies including several foreign exchange businesses that were controlled by Iranian Zarrab and his associates. Therefore, it was quite natural for the DEA to be interested in this case early on and work with Turkish police in thwarting cross-border drug trafficking as part of the long-standing law-enforcement cooperation between Turkey and the US.

By the way, it was not just the US officials who took an interest in the Zarrab-Happani drug and money laundering businesses. When Russian customs authorities seized $14.5 million and €4 million from one Iranian and three Azeri nationals who flew from Istanbul to Moscow on Oct. 16, 2010, Turkish police asked for information about the case via Interpol. Russian authorities informed Turkey on April 16, 2011 that suspects identified as Bagip Badalov, Ramin İsmailov, Gusein İsmailov and Iranian Mohammadsadig Rastgarshishegarhanekh had failed to declare the cash they were carrying and were facing smuggling charges under Russian Penal Code Article 188. When the Russian probe deepened, it was revealed in 2011 that Turgut Happani, Zarrab’s driver, and 13 other couriers had transported $40 million and €10 million via Turkey and the United Arab Emirates.

Turkish investigators then started looking closely into the businesses of Zarrab and his partners Turgut Happani, Abdullah Happani, Serdal Happani and Şenel Happani while especially scrutinizing a currency exchange operation called Durak Döviz that was owned by them. Businesses owned and operated by Zarrab and the Happani group included construction, auto and import/export business Homa Yapi; tourism, trade and construction firm Bella; maritime and industrial machinery firm Royal; and another company called Royal Holding, which had incorporated several firms under the same holding.

Police also discovered several other currency exchange houses in Istanbul’s Kapalicarsi district that mainly operated as a front for money laundering schemes in connection with Iranian nationals. A separate investigation conducted by the Financial Crimes Investigation Board (MASAK), a national coordinator for the US-led Financial Action Task Force (FATF), a unit of the Organization for Economic Co-operation and Development (OECD), identified 55 couriers who moved millions of dollars across borders under orders from Zarrab and his Happani associates. In the meantime, police had received several tips from whistleblowers who worked for the government and firms owned by Zarrab, providing further leads in the case.

On Sept. 13, 2012, police investigators submitted all the findings they had collected on drug trafficking and money laundering suspects to the Istanbul Chief Public Prosecutor’s Office, prompting a prosecutor to launch a new investigation under case number 2012/120653. An order for a wiretap to intercept the suspects’ communications was granted by the Istanbul 5th Criminal Court of Peace on Sept. 17, 2012. As a result of the surveillance, investigators were surprised to find out that two key suspects who were working with Zarrab were in fact very close to Interior Minister Muammer Güler. One was Rüçhan Bayar, a relative of the minister, and the other was Barış Güler, the minister’s own son who was listed as an advisor to Zarrab. As the investigation moved forward, it turned out Kaan Çağlayan, the son of then-Economy Minister Zafer Çağlayan, as well as European Union Affairs Minister Egemen Bağış and other government officials were all involved in a massive bribery scheme run by Zarrab and the Happani network to facilitate their businesses in Turkey.

All of this network appears to be connected to Erdoğan himself given the fact that Cabinet ministers could not on their own have run this very deliberate scheme of providing sanctuary to sanction buster Iranian operatives who were in bed with drug traffickers and money launderers. The investigation clearly outlines that state-lender Halkbank moving funds on behalf of these suspects was authorized by Erdoğan himself in exchange for getting a cut from the scheme. No wonder Zarrab donated millions of dollars to Erdoğan-family-run foundations and was treated as a VIP at state functions, posing with Erdoğan, his wife Emine and other government officials. Fearing that if Zarrab were to go down, he would go down as well, Erdoğan vouched for Zarrab and saved him from legal troubles when he was charged and jailed in the Dec. 17, 2013 graft case. Zarrab was freed but was arrested by the FBI in Miami when he went there on vacation in March 2016.

Turkish prosecutors were not actually planning to detain suspects in a sweeping wave of arrests on Dec. 17, 2013. Instead they wanted to further pursue leads, get the full picture and identify all the suspects, from corruption to drug trafficking, from money laundering to illegal arms trade. But when police chiefs in the financial and organized crime units told prosecutors that the interior minister had ordered police intelligence in Istanbul to follow investigators who were investigating Zarrab and his associates after he was alerted by Zarrab, who suspected he might be under surveillance, prosecutors thought the confidential probe could very well be exposed and derailed, prompting suspects to flee. That is why the prosecutors who were overseeing the investigation decided to move the detentions forward in the graft case, putting off the bust on drug trafficking and illegal arms trade to a later date.

Unfortunately, Erdoğan orchestrated the removal of all investigators, prosecutors and judges from the case as soon as the graft case was made public and helped free the suspects from jail after the mass dismissals and reassignments. Therefore, the important investigation on drug trafficking was thwarted by Erdoğan personally when partisan police chiefs and prosecutors who were brought in to replace those who had been dismissed decided to drop the probe into drug trafficking. That is why Erdoğan is angry at the DEA, which was working with Turkish law enforcement to crack down on international drug cartels. It is clear that the cooperation was sabotaged by the Turkish president. To suppress this information, the Turkish government is now accusing US officials of a major conspiracy, and Erdoğan is personally leading the charge against US missions in Turkey in his bid to scapegoat others for his own troubles with lies and smears.

Perhaps that pattern of behavior should not come as a surprise given the fact Erdoğan was nurtured in his youth in the run-down neighborhood of Kasimpasa in Istanbul, where drug dealers, mafia gangs and crime syndicates were operating. He had friends who had long rap sheets, from drug convictions to murders. For example, one of these people is Hasan Yeşildağ, a close ally of Erdoğan who now owns (at least on paper) the pro-Erdoğan Aksam and Star dailies and TV network Kanal 24, and is a convicted drug dealer who served time in Switzerland and Turkey. He is known as a money guy who managed Erdoğan’s financial affairs since the 1990s when Erdoğan was mayor of Istanbul, Turkey’s largest city. He is now overseeing the bulk of Erdoğan’s media empire. Another guy is Kudrettin Gören, a mafia leader who ran gambling and alcohol businesses in the same neighborhood where Erdoğan grew up and worked with him in local politics. When Gören was gunned down in his car in May 2001, police found cash in dollars and lira, an unlicensed gun and a wedding invitation for Erdoğan’s son Burak.

Incidentally, Burak, Erdoğan’s eldest son who killed an elderly woman in Istanbul in 1998 while driving without a license and was saved from legal troubles by his father, is reportedly a drug addict. Leaked audio files from March 2014 that were posted on the Internet revealed Burak’s extramarital affair with a woman from Switzerland. The audio exposed him as an unsettled and unbalanced man who was heard threatening to kill the woman in the intercepted phone conversation. In October 2014 Mehmet Erdoğan, nephew of Tayyip Erdoğan, was sentenced to four years, two months in prison on charges of drug trafficking by the İstanbul 1st High Criminal Court. Mehmet was caught with 50 kilos of drugs in a bust in Istanbul on Feb. 8, 2010. Yet he was released at his first hearing on June 27, 2011 when he said he was not a seller but rather had been a consumer of drugs for 22 years.

It will be interesting to see how Erdoğan’s story about his alleged links to the drug trafficking business unfolds. Rumor has it that some of the shipping lines run by Erdoğan’s family and business associates have been closely trailed in international waters on suspicion of illegal arms and drug trafficking. In fact, the recent spat with Greece over a Turkish freighter was reportedly more about this illegal scheme than unresolved sovereignty issues in the Aegean between Turkey and Greece.