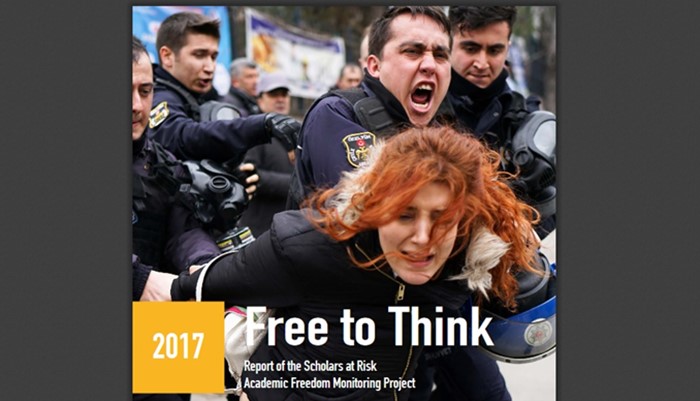 The Free to Think 2017 report from the New York-based Scholars at Risk (SAR) has called on responsible states, higher education leaders and civil society to respond to pressures on higher education in Turkey and to reject the use of coercive means to suppress peaceful expression.

Calling on authorities to “reject the use of violence, criminal investigations and penalties, legislative and administrative interference, and other coercive means to restrict peaceful expression” and asking them to “reaffirm publicly their support for the principles that critical discourse is not disloyalty, that ideas are not crimes, and that everyone should be free to think, question, and share ideas,” the report drew attention to injustices and restrictions in higher education.

“In Turkey, state and university authorities continue to take sweeping measures against the higher education sector. These include imprisonment and prosecutions; dismissals and expulsions of scholars and students; and restrictions on travel and institutional autonomy,” said the report.

Thousands of scholars, administrative staff and students have been targeted due to their alleged affiliations or for their research, publications and teaching, and decrees were issued to prevent thousands of scholars from going abroad and expel them from their positions at universities as well as prohibiting them from working at other state institutions in the future, the report stated.

Addressing the ongoing purge of academics in Turkey since a botched coup attempt on July 15, 2016, the SAR report noted that the purge poses an “unprecedented threat to a national higher education system.”

“Since September 1, 2016, 7,023 academic and administrative personnel have been targeted for dismissal from their positions, and 294 students have been expelled in accordance with a series of decrees issued under a state of emergency that continues to be extended. At least 990 scholars, staff, and students have been detained or arrested, with warrants served for at least 318 more.”

In most incidents, the SAR report shows, academics were accused of coup charges due to their links to the Gülen movement, which the Turkish government claims is responsible for organizing the coup. While, according to the report “the evidentiary basis supporting these allegations has often been unclear or undisclosed to the public,” many were detained for allegedly using ByLock, a secure smartphone messaging application claimed to be a communication tool among Gülen movement members, or working in an institution affiliated with Gülen.

“Detentions, prosecutions, dismissals and expulsions, travel restrictions, and other sweeping actions have disproportionately affected the higher education sector. The speed and scale of these actions suggest a disregard for due process rights and for the role of higher education, inquiry, and expression in democratic society. In addition to the tragic effects on the immediate victims and their families, these actions risk irreparable harm to the reputation and quality of Turkey’s higher education institutions,” the report said.