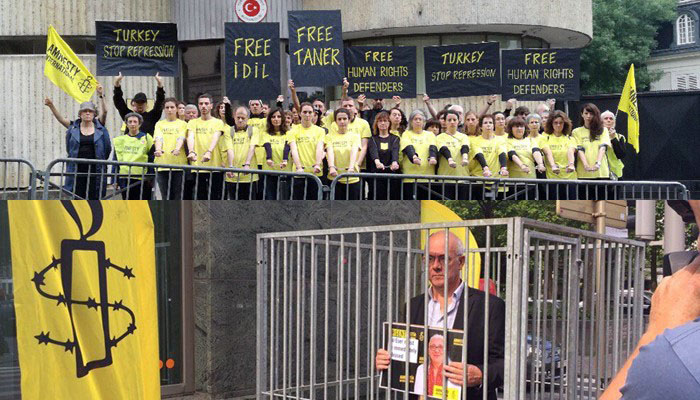 Amnesty International members have protested the detention and arrest in Turkey of İdil Eser and Taner Kılıç, both of AI, in front of Turkish embassies in Paris and Brussels.

Philippe Hensmans, Belgian director of Amnesty, locked himself in a cage in front of the Turkish Embassy in Brussels to protest the detention of Eser and arrest of Kılıç.

About 35 members of AI protested the detention and arrest of their colleagues in Turkey, handcuffing themself in front of the Turkish Embassy in Paris.

Last Wednesday Turkish police, acting on an anonymous tip, raided a hotel on Büyükada, one of the Princes’ Islands off İstanbul, and detained Eser from AI, İlknur Üstün from the Women’s Coalition, lawyer Günal Kurşun from the Human Rights Agenda Association, lawyer Nalan Erkem from the Citizens Assembly, Nejat Taştan from the Equal Rights Watch Association, Özlem Dalkıran from the Citizens’ Assembly, lawyer Şeyhmuz Özbekli, and Veli Acu from the Human Rights Agenda Association. Two foreign trainers — a German and a Swedish national — as well as the hotel owner, who was later released, were also detained.

AI Secretary-General Salil Shetty in a statement on Wednesday harshly criticized the detention of AI Turkey Director Eser along with the seven other human rights activists, calling it “a grotesque abuse of power.”

Turkish President Recep Tayyip Erdoğan accused the detained human rights defenders of plotting a follow-up to a July 15, 2016 coup attempt during a press conference in Hamburg on Saturday.

Taner Kılıç, a lawyer and chairman of AI’s Turkey’s board, was arrested on June 9, accused of links to the alleged mastermind of a failed coup attempt on July 15, 2016, Fethullah Gülen, who has denied any involvement.

“I am proud of being part of the human rights [defenders] community. I really care about the national and international solidarity that encouraged human rights defenders and now us in police custody. I never felt before in my life like I have a family. So glad I have you,” Dalkıran said.

Eser also said: “We all deserve to live in a peaceful world. It is beautiful to be part of the rights struggle. Hope to be in solidarity forever.”