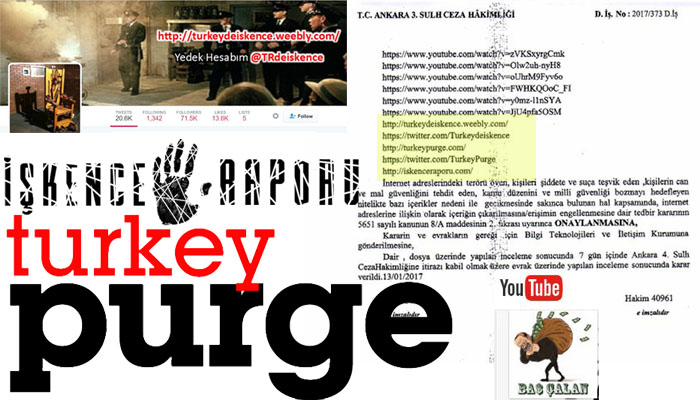 An Ankara court has banned access to YouTube videos that expose the involvement of the ruling Justice and Development Party (AKP) and the family of President Recep Tayyip Erdoğan in large-scale corruption and websites that report on government purges and torture in prisons and detention centers following a failed coup attempt last July.

Turkeypurge.com reported on Sunday that access to its website and Twitter account were blocked by a decision of the Ankara 3rd Penal Court of Peace on Jan. 13 immediately after the Prime Ministry’s General Directorate of Security Affairs wrote a letter the same day about the websites, Twitter accounts and YouTube videos, saying they were “inconvenient.”

Access to the websites https://turkeydeiskence.weebly.com/, http://turkeypurge.com/ and http://iskenceraporu.com/ and Twitter accounts under the pseudonyms of @Turkeydeiskence and @TurkeyPurge were blocked in Turkey. The websites and Twitter accounts expose reports, letters from the victims of a widespread government purge, stories of torture in prisons and violations of human rights in Turkey.

The court also banned access to several YouTube videos and YouTube users that leaked recordings of telephone conversations between President Erdoğan and his son Bilal and also Bilal’s telephone conversations with several controversial businessmen, revealing the Erdoğan family’s involvement in corruption which was first made public in December 2013, when four ministers, sons of ministers, politicians, businessmen close to the AKP and the Erdoğan family were detained as part of an investigation into a major graft scandal.

Thousands of police officers, prosecutors, judges, including those who oversaw the graft probes, and civil servants were first suspended then either dismissed or arrested over links to the faith-based Gülen movement, which the government and Erdoğan accused of being behind the graft probe.

The AKP government, which launched a war against the faith-based Gülen movement following the eruption of the corruption scandal, carried its ongoing crackdown on the movement and its sympathizers to a new level after a failed coup attempt on July 15.

Although the movement strongly denies having any role in the corruption probe or the coup attempt, the government accuses it of having masterminded both despite the lack of any tangible evidence.

Turkish Islamic scholar Fethullah Gülen, who inspired the movement, called for an international investigation into the coup attempt, but President Recep Tayyip Erdoğan — calling the coup attempt “a gift from God” — and the government initiated a widespread purge aimed at cleansing sympathizers of the movement from within state institutions, dehumanizing its popular figures and putting them in custody.