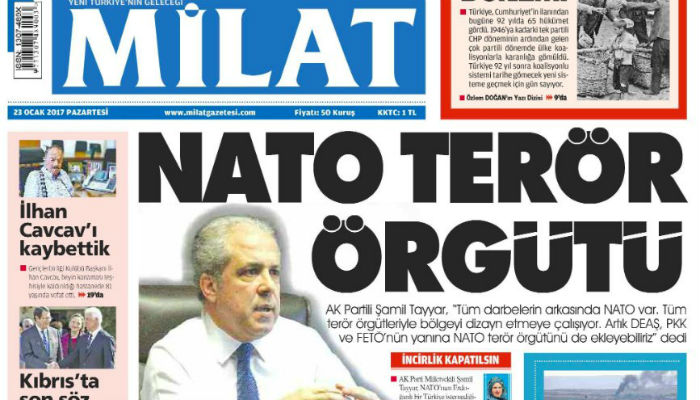 “NATO a terror organization,” read the headline of the pro-government Milat daily on Monday which quoted remarks from Tayyar, who gave an interview to the daily.

In response to a question saying that there is a strong perception in Turkey about the masterminds of a failed coup attempt on July 15 as being NATO and the US, Tayyar said: “Turkey has been subjected to coups since it joined NATO. NATO has always been involved in all the dirty and bloody developments that happened in the country. The 1960 coup was staged by the British and the 1971 military memorandum was the work of the CIA, while the 1980 coup was staged by NATO. According to NATO’s plan, which drew a new roadmap for itself, there should not be a Turkey with [President Recep Tayyip] Erdoğan. NATO, which is trying to redesign the region with all the terror organizations, has now become a threat against Turkey. You could add NATO to the list of terror organizations Daesh [another acronym for the Islamic State in Iraq and the Levant (ISIL)], PKK [Kurdistan Workers’ Party (PKK)] and FETÖ [a derogatory term used by the government to refer to the faith-based Gülen movement] because it has become a terror group.”

İncirlik is considered a pivotal and convenient location for US operations in Syria and in the greater region.