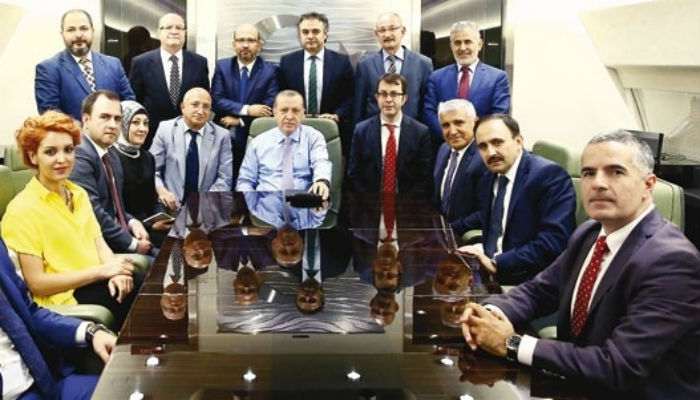 President Recep Tayyip Erdoğan has called on the United States administration to either extradite Turkish Islamic scholar Fethullah Gülen or detain him, despite not having submitted any evidence to the US to date that Gülen masterminded a failed coup attempt in July.

Speaking to reporters on Tuesday night while returning from China where he attended the G20 summit, Erdoğan said he had discussed the extradition issue in detail with US President Barack Obama and Vice President Joe Biden.

Erdoğan said he told US officials that Gülen is still giving interviews to the media from his 400-decare compound in the US, adding that he needs to be detained until a US court makes a decision about Turkey’s extradition request.

Erdoğan said the US should detain Gülen in line with the 10th article of an agreement between Turkey and the US concerning the extradition of criminals.

Turkish authorities claim Gülen, who lives in Pennsylvania, was the mastermind behind the violent coup attempt that killed over 240 people and injured a thousand others on July 15, while Gülen strongly denies any involvement.

The Turkish government and President Erdoğan have designated the faith-based Gülen movement, inspired by Gülen and operating charities, schools and businesses around the world, as a terrorist organization and have launched a widespread crackdown on suspected members since the failed coup.

US Vice President Biden, who paid a visit to Ankara last month, said the US administration wants to cooperate with Turkey over the Turkish government’s request for the extradition of Gülen but that it is a US court that will make the decision.

Although President Erdoğan has repeatedly called on the US administration to extradite Gülen to Turkey, it has emerged that Turkey has still not sent a dossier to the US attempting prove Gülen’s involvement in the failed coup.

Speaking at a news conference on Sunday on the sidelines of the G20 summit in China after meeting with US President Obama, Erdoğan said Turkey had sent a dossier to the US about Gülen prior to the July 15 coup attempt and will send a new file regarding Gülen’s alleged involvement in the failed coup to the US later.

Although Gülen called for an international investigation into the coup attempt, Erdoğan — calling the coup attempt “a gift from God” — and the government launched a widespread purge aimed at cleansing sympathizers of the movement from within state institutions, dehumanizing its popular figures and putting them in custody.

A report published by the German Focus magazine last month claimed that Turkish government members decided to put the blame for the coup attempt on Gülen half an hour after the uprising and agreed to begin a purge of Gülen followers the next day.

The German magazine wrote its report based on interceptions of phone calls by English intelligence, emails and SMS messages of members of the Turkish government.