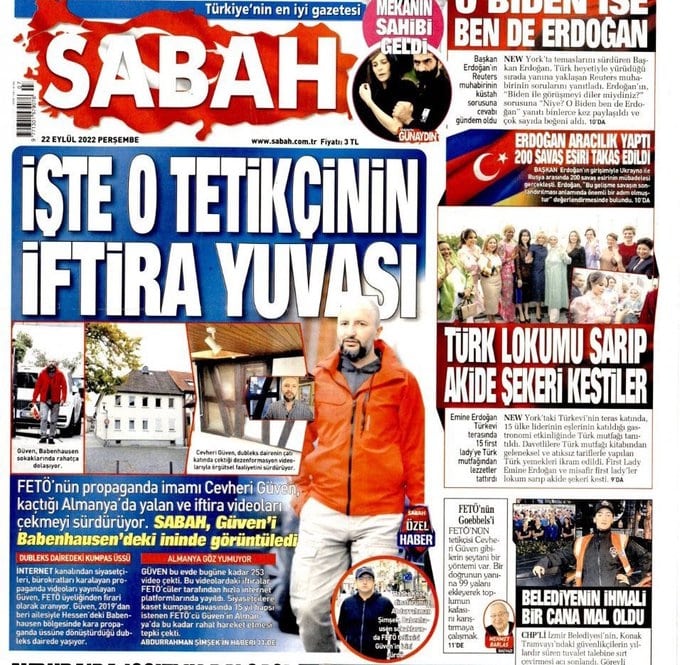 The German Association of Journalists (DJV) has voiced support for investigative Turkish journalist Cevheri Güven, who lives in exile in Germany and was targeted by a pro-government newspaper on its front page last week.

“Unbelievable! #Erdogan-faithful newspaper hunts down Turkish journalist in exile in Germany @cevheriguven. Solidarity with the courageous investigative journalist,” the association tweeted in German, expressing surprise about the search for Güven carried out by the pro-government Sabah daily.

On its front page last Thursday, the Sabah daily, owned by the pro-government Turkuvaz Media Group, published photos of Güven walking on the street with a bag from a bakery in a German city. He is one of hundreds of Turkish journalists and government opponents who had to flee Turkey in the aftermath of a failed coup in July 2016 to avoid a massive crackdown launched by the government.

Sabah referred to Güven as the “propaganda imam of Fetö,” a term coined by the Turkish government to refer to the faith-based Gülen movement as a terrorist organization.

Sabah also published photos of Güven’s house, labelling it a “center of slander” and saying that the journalist has shot 253 YouTube videos so far in his home, accusing him of slandering Turkish bureaucrats and politicians.

Güven’s videos on YouTube in which he talks about the Turkish government’s corruption and murky relations attract as many as 1 million viewers.

In an interview with Turkish Minute, Güven said Turkey’s National Intelligence Organization (MİT) was behind the search for him and that he was being targeted for investigating MİT’s alleged role in the organization of the July 15 coup attempt.

Following Sabah’s story, Güven received widespread support and messages of solidarity from journalists and press organizations that condemned Sabah for targeting a journalist for uncovering government corruption. There were also calls for a stepping up of police measures to better protect Güven against potential attacks from pro-Erdoğan figures in Germany.

Güven has recently been facing growing pressure and threats from pro-government circles in Turkey as his videos continue to reach a large audience, even attracting more viewers than some mainstream news outlets in Turkey.

Journalists who fled Turkey following the coup attempt to avoid jail on bogus terrorism or coup charges such as Güven have established their own news outlets and have become the major source of news for some Turks in a country where 90 percent of the national media is owned by pro-government businessmen who toe the official line, according to Reporters Without Borders (RSF).