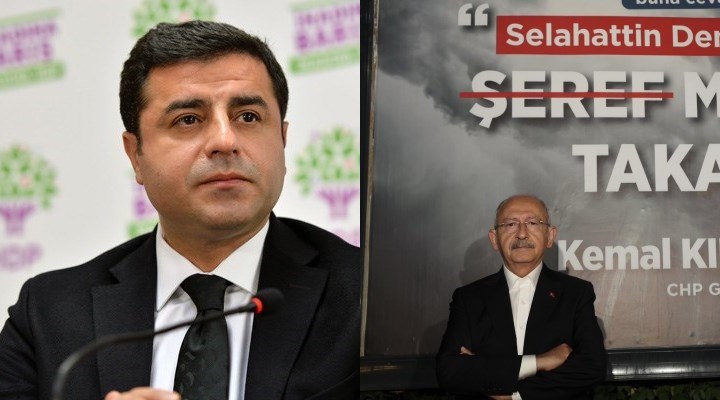 The billboards, which were erected in Elazığ prior to CHP leader Kemal Kılıçdaroğlu’s arrival in the city on Monday to hold his party’s group meeting the next day, quote Kılıçdaroğlu as saying, “I will hang a medal of honor on Selahattin Demirtaş’s chest.”

Arrested on Nov. 4, 2016 on terrorism-related charges, Demirtaş, a former co-chair of the pro-Kurdish Peoples’ Democratic Party (HDP), has since then remained in prison despite two European Court of Human Rights (ECtHR) rulings in 2018 and 2020 that said Demirtaş was imprisoned for “political” reasons and not for “legal” reasons, ordering his “immediate release.”

The question “Can Kılıçdaroğlu answer for this?” is also asked on the billboards that accuse Kılıçdaroğlu of supporting Demirtaş, and by implication, terrorism.

Commenting on the development, Demirtaş said in a series of tweets that the AKP government didn’t hesitate to engage in “all kinds of discrimination and provocation,” but that the citizens of Turkey, especially his fellow townsmen from Elazığ, would “act with common sense and never be a tool for these provocations.”

Kılıçdaroğlu also accused the AKP of staging a provocation. The CHP leader posted a photo of himself in front of one of the billboards bearing his remarks on Twitter, saying, “They decorated the whole place with these to [cause trouble for my] visit to the city. … The sad thing is that while these cheap provocations are staged, no one thinks about what will happen to the broken hearts of our citizens.”

“There is a fundamental difference between you and us. We are patriots, and you are opportunists who think anything is fair for a vote. … Down with this discrimination!” the CHP leader added, addressing the ruling AKP.

Both President Recep Tayyip Erdoğan’s AKP and its ally, the far-right Nationalist Movement Party (MHP), frequently accuse HDP, the second-largest opposition group in parliament, of ties to the PKK, listed as a terrorist organization by Turkey and much of the international community. The party denies the government’s claim and says it is working to achieve a peaceful solution to Turkey’s so-called Kurdish issue.

The “Kurdish issue,” a term prevalent in Turkey’s public discourse, refers to the demand for equal rights by the country’s Kurdish population and their struggle for recognition.

Turkey’s Constitutional Court in June 2021 accepted an indictment filed by a prosecutor seeking closure of the HDP and the imposition of a political ban on 451 party members as well as a freeze of the party’s bank accounts for alleged ties to the outlawed PKK.