Stripped of her clothes and pushed back in the freezing cold, Turkish asylum seeker says journey to Greece was perilous 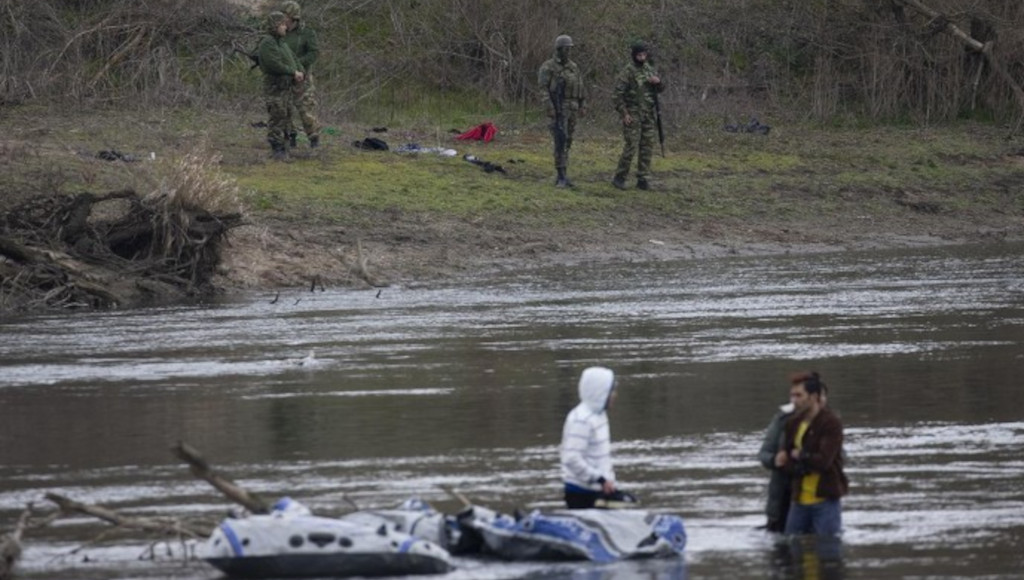 H.T., a 40-year-old teacher, was pushed back to Turkey by Greek authorities as she was trying to flee to a safer country and reunite with her young children who were already in Germany, according to a special report by the Stockholm Center for Freedom.

Speaking to the Stockholm Center for Freedom, H.T. said getting to Greece had already been a tough ordeal since it took three tries to reach the Turkish side of the border. Planning their journey with her nephew, O.K., H.T. first tried to travel to Europe by sea. The pair went to Bodrum, a bustling tourist town, that is only a 30 minute ferry ride to the Greek island of Kos.

Despite having paid smugglers a fee, H.T. and O.K. waited in vain for somebody to show up. “We were in hotel, lying low and trying not to stand out,” H.T. said. “The smuggler said he was arranging a boat and that we would have to wait for a couple of days. But after days of waiting we understood he had taken our money and would never show up.”

H.T., a mother of three, was accused of links to the Gülen movement based on anonymous witness testimony. The prosecutor sought a seven-year, six-month sentence for her.

The Gülen movement is accused by the Turkish government and President Recep Tayyip Erdoğan of masterminding a failed coup and is labeled a “terrorist organization,” although the movement denies involvement in the coup attempt or any terrorist activity.

Her husband had already been handed down a prison sentence on similar charges in 2017 and had fled to Germany to escape incarceration.

Thousands of post-coup purge victims had to leave the country illegally because the government had revoked their passports.

Purge victims who wanted to flee the country to avoid the post-coup crackdown took dangerous journeys across the Evros River or the Aegean Sea. Some were arrested by Turkish security forces; some were pushed back to Turkey by Greek security; and others perished on their way to Greece.

According to a Eurostat report for 2008-2020, Turkish citizens are among the top asylum seekers in EU countries, ranking seventh in a list of countries whose citizens sought asylum in the EU in 2020.

Fearing for her children’s safety, H.T. sent her children to live with their father, but she couldn’t stay in Turkey not knowing if she would ever see them again. Therefore, she was adamant to keep trying to cross the border.

Their second try was even more complicated since this time they decided to get to Greece by crossing the Evros River. They left for Edirne but were stopped by Turkish police along the way. Too afraid to complete the journey, H.T. and her nephew returned to Istanbul.

“The police had checked our identity cards, and I just know they saw on the system that I had an ongoing trial. We were too afraid to continue the journey in case the police were following us, so we decided to postpone it and try later,” H.T. said.

Just as H.T. and O.K. had predicted, they were followed and watched by shady looking men in the following days.

When they felt safer, they decided to travel once again to Edirne to cross the Evros River. “It was November 2021, and the journey was far from easy. We had to hide in the bushes for hours so we wouldn’t get caught,” H.T. said.

They crossed the river in the afternoon and walked through the swamps for hours in the freezing cold. As night fell and the weather got even colder, it had become nearly impossible to keep walking. In some places they were up to their chest in mud, but turning back was also impossible.

The worst was yet to come, as men wearing green uniforms found them in the swamp. “We told them we were fleeing oppression in Turkey and were affiliated with the Gülen movement,” H.T. said. “They told us the police would arrive and take us to an asylum registration office.”

Instead the pair was put in a windowless van and taken to a detention center. The officers took their phones and personal belongings and locked them up in a cell. Freezing, tired and hungry, the pair had no idea what was awaiting them.

They were not alone in the cell as there were four others. Another group of officers in blue uniforms and masks came and told them to take off their clothes and shoes. They were left in their underwear and searched. According to H.T. the officers even looked inside their ears. Although the group asked for their clothes back, the officers did not allow them to get dressed.

“I had my underwear and a pair of thin leggings,” H.T. said. “But the others were just in their underwear. Just imagine, being left in your underwear in the freezing cold.”

They were re-boarded on the van in this state with a group of other asylum seekers and taken back to the Evros River, where a boat was waiting for them. There was an Afghan man steering the boat, which took them back to Turkey.

While they departed from the shore, the officers shot their guns after them. Shocked by the ordeal and soaking from the pouring rain, the group arrived in Turkey at five in the morning.

Struggling to walk in the mud without their shoes, the group tried to find a village. However, once again they were picked up by border officers, only this time Turkish. The officers asked if there were any Turks among the group, but H.T. and her nephew stayed silent.

They were lucky as none of the officers had noticed they were Turks and dropped them off at a village. H.T. and her nephew eventually managed to find their way back home and nearly six months later crossed once again into Greece.

This time they were not pushed back but were detained at a police station on the border. “It was terrible,” H.T. said. “The cell smelled awful, and we had to share it with some men for 11 days. But my husband had travelled to Greece to meet us, and once we were let go, we were reunited after an absence of several years.”

H.T., her children and husband now live together in Germany. She can never forget what happened in Greece, and those who were not as lucky as her. “The journey is perilous,” she said. “Many people have accidents after being pushed back, and some drown. Greece does not accept any responsibility, but this is the truth.”

In a previous interview with Stockholm Center for Freedom, pushback victims said Greek authorities need to realize that by pushing them back to Turkey, they are sending them to prison.

The United Nations Refugee Agency, members of the European Parliament and human rights watchdogs have repeatedly demanded that Greek authorities investigate such incidents of pushback.

According to Amnesty International, the practice of migrant pushbacks in Greece has become so bad that even people who have applied for asylum and have been in the country for some time are being picked up and deported.

EU Home Affairs Commissioner Ylva Johansson during a visit to Greece in March called on the country to “do more” to investigate the allegations. However, Greek Migration Minister Notis Mitarachi denied Greek authorities’ involvement in any kind of pushback.