[OPINION] What really lies behind Erdoğan’s push for SCO membership? 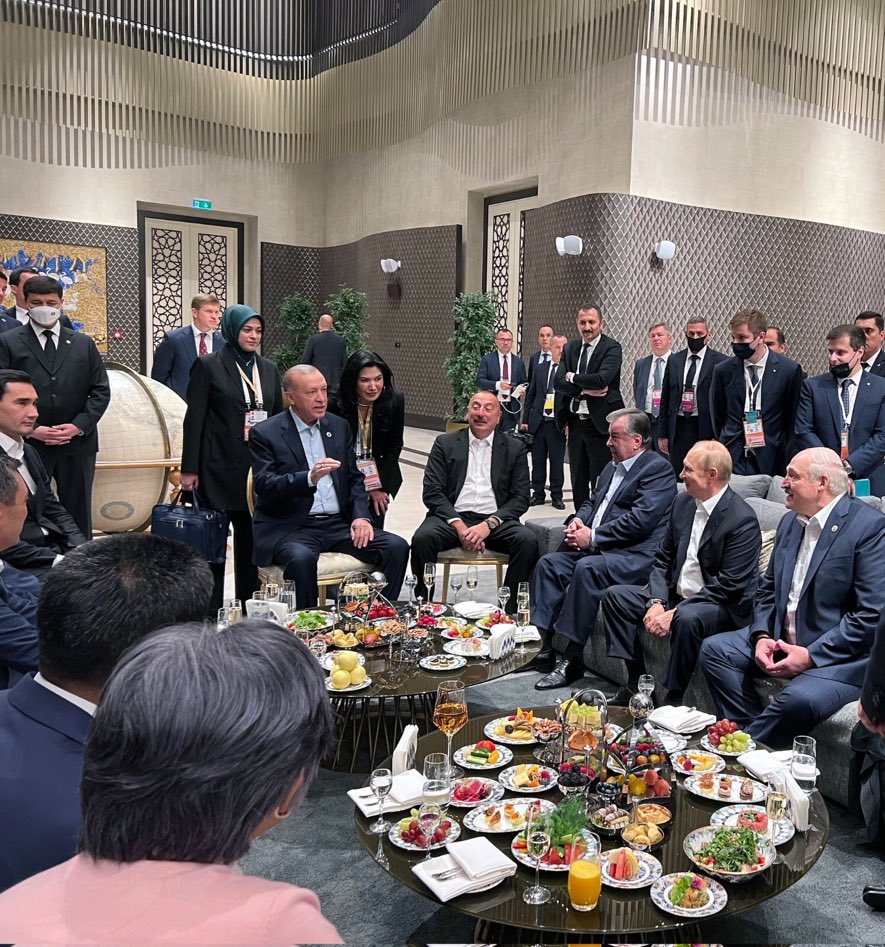 Turkish President Recep Tayyip Erdoğan has announced several times since 2013 his intention to bring Turkey into the Shanghai Cooperation Organisation (SCO). He has demonstrated his seriousness by travelling to the Uzbek city of Samarkand to take part in the 22nd meeting of the SCO’s Council of Heads of State Sept. 15-16. Erdoğan knows the SCO is not an economic or political organization that can serve as an alternative to the European Union, but his ultimate goal is to move Turkey away from Western democracy and to establish a dictatorial regime wherein he is able to cover up his corruption.

Erdoğan is to address the second session of the summit and appear in a group photo. The Turkish leader and Russian President Vladimir Putin will discuss a grain export deal that was struck on July 22 through the mediation of Turkey and the United Nations to safely transport desperately needed grain and fertilizer. The two leaders are also expected to discuss the Syrian and Libyan conflicts during the summit.

The SCO was founded in 1996 by the People’s Republic of China, the Russian Federation, Kyrgyzstan, Tajikistan and Kazakhstan to disarm the border regions and encourage regional cooperation under the name of the “Shanghai Five.” Uzbekistan joined the organization in 2011, and India and Pakistan became full members in 2017. Iran was announced as the ninth member state of the SCO in 2021, while Turkey, Sri Lanka, Cambodia, Nepal, Azerbaijan, Armenia, Saudi Arabia, Egypt and Qatar have become Dialogue Partners. Afghanistan, Mongolia and Belarus have also obtained observer status in the SCO.

Erdoğan’s Justice and Development Party (AKP), which came to power in 2002, advocated for the country’s EU membership and democratic reforms during the first decade of its rule. However, the AKP administration began showing signs of growing authoritarianism in 2011 when Erdoğan began displaying increasingly less tolerance towards his opponents and critics. It is no coincidence that Erdoğan began mentioning SCO membership at the beginning of 2013, several months before he was faced with a wave of demonstrations and civil unrest against his rule that took place in the summer of the same year due to his government’s plans to demolish Gezi Park in central İstanbul. Turkish prosecutors also launched massive corruption investigations involving Erdoğan’s inner circle including his son Bilal Erdoğan on December 17 and 25, 2013. Erdoğan dismissed the Gezi Park protests by claiming it was the work of a few looters and ordered police to suppress the crowds by force. Through political power, he managed to halt all the corruption investigations against government members by jailing the police officers and prosecutors who conducted the investigations.

Then-prime minister Erdoğan revealed his hidden agenda to take Turkey to the side of China and Russia, saying in an interview on a Turkish TV station in July that “I was joking with Putin in Russia. You hang out with us from time to time, asking what we’re doing with the EU. So I also joked with him that now he can take us into the Shanghai Five and we will reconsider the EU.” Erdoğan commented at the time that the Shanghai Five was more powerful and superior and that Turkey had more in terms of shared values with SCO members than with EU states.

Turkey applied to join the SCO as a guest member in 2007, 2009 and 2010 but failed to receive a favorable response. Ankara then applied for “Dialogue Partnership Status” on March 23, 2011. The SCO finally approved Turkey’s application to become a Dialogue Partner at the SCO heads of state summit in Beijing in June 2012.

Turkey is a NATO ally and is competing with China and Russia in Central Asia. It appears that Turkey’s full membership in the SCO is not realistic in the short term; however, Turkey has a unique place among the dialogue partners in the SCO since Turks share cultural, historical, linguistic and ethnic ties with the Central Asian countries of Kazakhstan, Uzbekistan and Kyrgyzstan, all of which are full members of the SCO.

Since Turkey has slowly changed direction from the European countries, the AKP’s foreign policy has largely been redirected toward Africa and Central Asia. Erdoğan has paid more visits to Africa than any other non-African leader and frequently visits Central Asia. Erdoğan is no longer pursuing Turkey’s traditional secular foreign policy in Central Asia as these countries were part of the communist Soviet Union, and their leaders established secular states following the dissolution of Soviet rule in 1991. However, the strong leaders of Central Asian Turkic countries have either died or are no longer in power, and as a result the region has grown increasingly susceptible to Erdoğan’s interference. SCO member Kazakhstan’s leader, Nursultan Nazarbayev, and the founding father of Uzbekistan, Islam Karimov, who ruled the country from 1989 until his death in 2016, are no longer in power. Turkey has had strong relations with Kazakhstan and Kyrgyzstan since these countries gained independence from Soviet rule; however, the Uzbekistan case was different. Karimov was very suspicious of Turkish leaders since Ankara did not extradite exiled Uzbek opposition figures in the 1990s. Turkey also sided with the United Nations in condemning Tashkent for the 2005 Andijan massacre in which the Karimov government killed protestors. Erdoğan has now managed to establish strong ties with Uzbekistan’s current leader, Shavkat Mirziyoyev, who came to power in September 2016 following Karimov’s death. Turkey and Uzbekistan established the “Comprehensive Strategic Partnership,” and bilateral trade between the two countries exceeded $3.6 billion in 2021. Erdoğan has visited Uzbekistan several times since 2016, and in 2016 Mirziyoyev made the first official visit from Uzbekistan to Turkey since 1999.

Turkey has strong business ties with all the SCO members, but the SCO is neither a military defense alliance analogous to NATO nor a political and economic alliance such as is the case with the EU. The SCO’s activities remain predominantly at the level of planning and do not extend to implementation to diffuse potential border conflicts.

Strong SCO members China and Russia have always been keen to establish close ties with the strategically located Turkey, hoping to keep this NATO member on their side. However, these powers are competing with Turkey in the Central Asia region for economic and political power. Moreover, Turkey’s criticism of the Beijing government over its crackdown on Uighurs has led to some degree of tension between the two countries. Erdoğan’s main aim is to create strong ties with the Turkic countries in Central Asia but not to collaborate with Moscow or Beijing in the region. At the same time, Erdoğan remains serious about Turkey’s bid for SCO membership in order to allow him to implement his plans for Turkey with an iron fist as most SCO country leaders do.