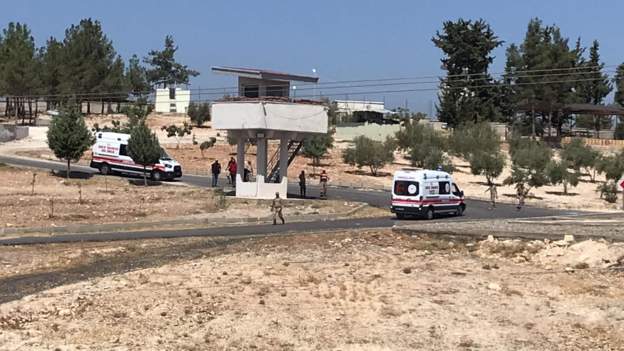 One Turkish soldier was killed and four others were injured after a rocket attack from northern Syria targeted a border post in Şanlıurfa, a southeastern province that borders Syria, the state-run Anadolu news agency reported on Tuesday, citing a local official.

Şanlıurfa Governor Salih Ayhan told Anadolu that the rocket attack targeting the Çiçekalan border post in Birecik was carried out by terrorist organizations across the border on Tuesday morning.

The Turkish Defense Ministry also released a written statement, offering condolences to the family of the slain soldier, the Turkish Armed Forces and the Turkish nation and wishing a speedy recovery to the four soldiers receiving treatment at a hospital.

The ministry added that 13 terrorists were “naturalized” after targets detected in Syria’s Ayn-al Arab region were put under intense fire following the attack.

The Mezopotamya news agency on Tuesday said, citing a report by the Hawar news agency, that a child was killed and three others were injured in the Turkish bombardment of targets in northern Syria.

The development comes after Turkish President Recep Tayyip Erdoğan has for several months threatened to launch a military offensive in northeast Syria against the People’s Protection Units (YPG), which is considered by Ankara an extension of the Kurdistan Workers’ Party (PKK), an armed group listed as a terrorist organization by Turkey and much of the international community.

Turkey has carried out three cross-border operations in Syria against the Islamic State in Iraq and the Levant (ISIL) as well as US-backed Kurdish militias and has frequently used factions of armed Syrian fighters in addition to its own forces.