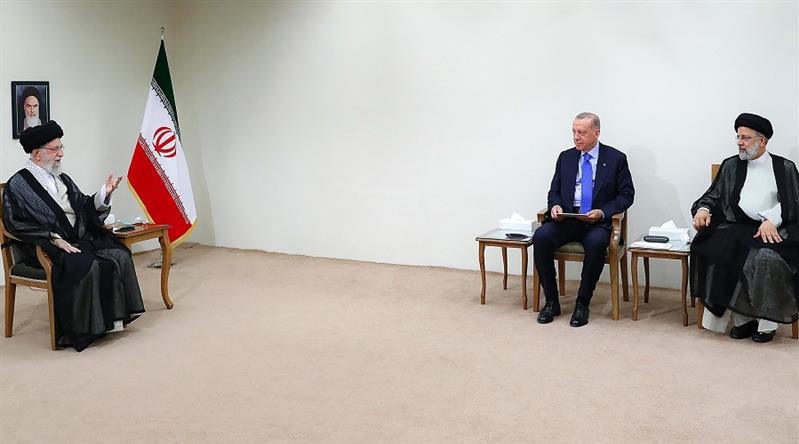 Iranian President Ebrahim Raisi hosted his Russian and Turkish counterparts on Tuesday in Tehran for the 7th trilateral Astana Summit to discuss the latest developments in Syria. This week’s meeting received more attention than previous gatherings as this was Russian President Vladimir Putin’s second foreign trip beyond the former Soviet Union since having launched a war on Ukraine in late February. Putin’s visit came just days after US President Joe Biden’s four-day trip to Israel and Saudi Arabia, Iran’s regional foes. Putin took the opportunity to discuss Tehran’s drone sales to Russia with Iran’s Supreme Leader Ayatollah Ali Khamenei. He also discussed Ukraine’s grain exports through the Black Sea with Turkish President Recep Tayyip Erdoğan, who made his long-awaited official visit to Tehran. The three countries continue to hold the Astana talks, which were initiated in 2017 to bring a solution to the Syrian crisis for peace in the country, but the irony is that the Syrian conflict remains a direct subject of disagreement among the three countries, with all three having direct military involvement in Syria. Turkey opposes Bashar al-Assad, while Moscow and Tehran back the Syrian president. Both the Moscow and Tehran governments oppose Erdoğan’s plans for a new military operation in Syria to target Kurdish armed groups and to create a 30-kilometer-long security zone along the Syrian-Turkish border.

Biden’s first stop on his maiden trip to the Middle East since taking office was Israel, presumably to assure Jewish leaders that the United States will not allow Tehran to destabilize the region. Biden then landed in the Saudi city of Jeddah, where he sent a message to Russia and China that the United States would remain a major force in the Middle East, not allowing other powers to influence politics in the region. “We will not walk away and leave a vacuum to be filled by China, Russia or Iran,” Biden said at the Gulf Cooperation Council summit in Jeddah.

Iran and Turkey are important allies to Russia as both of these Muslim countries have refused to join Western sanctions on Russia and have kept in close contact with Moscow since Russia launched its war on Ukraine. Turkey and Iran want to improve their commercial ties with Russia. Turkey exports over a billion dollars annually in food and agricultural products to Russia, while the Turkish tourism sector is largely dependent on Russian tourists. Russia is building Turkey’s first nuclear power plant, and Turkey and Russia launched the 930 kilometer TurkStream pipeline across the Black Sea that carries Russian gas to southern Europe through Turkey. NATO member Turkey also purchased S-400 surface-to-air missile systems from Russia in a deal that angered NATO.

Tehran’s rapprochement with Russia has more to do with Western sanctions on Iran. The Tehran government seeks Russian support for its nuclear program and is now trying to export combat drones to Moscow. Iranian media reported that the National Iranian Oil Company and Russia’s Gazprom signed a memorandum of understanding “worth about $40 billion.” Turkey also values economic cooperation with neighboring Iran, with Erdoğan and Raisi co-chairing the seventh meeting of the Turkey-Iran High-Level Cooperation Council to enhance bilateral cooperation. Turkish media reported that Ankara and Tehran signed a total of eight agreements in the areas of trade, infrastructure, security and sports, with Erdoğan confirming that the countries plan to increase the bilateral trade volume to $30 billion.

Erdoğan’s main agenda during the Tehran meeting was to convince Raisi and Putin of the need for a Turkish military operation against Kurds in Syria. Support from the United States and major European countries for Kurdish groups in Syria frustrates Erdoğan as Turkey sees the People’s Protection Units (YPG) and the Syrian Kurdish Democratic Union Party (PYD) as offshoots of the outlawed Kurdistan Workers’ Party (PKK). The PKK is a Kurdish armed group that has fought against the Turkish state since 1984 to form an autonomous or independent Kurdish state in Turkey’s Kurdish-majority southeastern region. The group is listed as a terrorist organization by Turkey, the US and European Union.

Turkey has launched several military operations in Syria in recent years, preventing the unity of Kurdish cantons in Syria along the Turkish border. Turkey is now in control of about 250 kilometers of the Syrian border, which includes the Syrian towns of Afrin, al-Bab, Azaz, Jarabulus, Jindires, Rajo, Tal Abyad and Ras al-Ayn. Russia has been working closely with Turkey, which has control over jihadists in Idlib province, and in exchange Russia allows Ankara room to maneuver in taking action against YPG forces in the Afrin region. On the other hand, Russia does not recognize the PYD nor the PKK as terrorist organizations and moreover, Moscow has been pressing for the inclusion of PYD representatives at Syrian peace talks. Khamenei also warned Erdoğan to refrain from any military operations against Kurds in Syria and has called for dialogue to resolve the issue, Iranian media reported.

Iran has its own Kurdish problem as millions of Kurds live in northwest Iran, and Iranian Kurdish rebels have been fighting Tehran for decades to establish independent Kurdish rule within Iran. Iran, however, opposes Turkey’s operation in Syria since Tehran is fighting for its own influence in Syria. Iranian-backed forces have been supporting Assad’s forces, while Iran has also been focused on influencing local Syrians. Iran-backed militias control many cities in Deir al-Zour province. The eastern region is important for Tehran to establish a land route from Iran across Iraq and Syria and into Lebanon. Iran is also trying to take advantage of the security gap in Syria as Russian forces remain focused on Ukraine.

The Turkish, Russian and Iranian leaders in their trilateral statement following the seventh meeting in Tehran said they “rejected all attempts to create new realities on the ground … including illegitimate self-rule initiatives” in the war-torn Arab country of Syria. Erdoğan, however, is continuing with his plans to take over more Syrian territory on the pretext of preventing Kurdish threats from the Syrian border. Washington, the European Union, Russia and Iran are all currently united against Turkey’s planned military operation against Kurds in Syria. Erdoğan does not want a northern Iraq-type Kurdish rule in Syria but is opening the way for Kurdish armed groups to complete their self-rule in Syria while he supports jihadists against Assad’s forces.