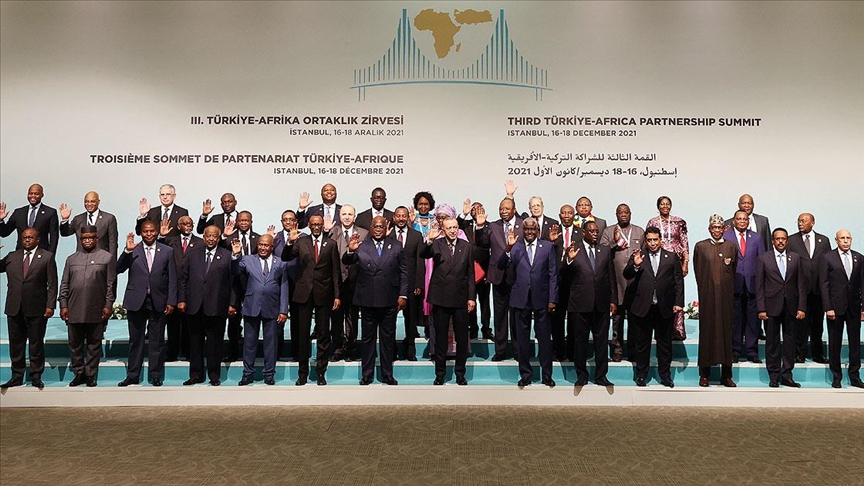 Turkey was supposed to hold the third Turkey-Africa summit in 2019, but Ankara failed to secure support from Egypt’s President Abdel Fattah Al-Sisi, who was the AU chair that year.

The Turkey-Africa summit was also cancelled in 2020 due to the COVID-19 pandemic. Turkey’s relations with Egypt have soured even further over Ankara’s military support for the Tripoli-based Government of National Accord (GNA) against Khalifa Haftar’s Libyan National Army (LNA). Egypt supports Haftar to keep its border safe.

Moussa Faki Mahamat, the African Union Commission (AUC) chairperson, lobbied for Turkey’s third Africa summit. Mahamat’s visit to Turkey on Sept. 30 put an end to months of suspense as it was decided that the Turkey-Africa summit would be held in December in Istanbul. AUC Chairperson Mahamat had lunch with Erdoğan at the presidential palace in Ankara, and the next day he enjoyed a boat trip on the Bosporus and had a meeting with the leaders of major Turkish companies.

Previous Turkey-Africa summits were held in Istanbul in 2008 and Malabo in 2014. The Economic and Business Forum was held in Istanbul Oct. 21-22 2021, at which Turkey hosted important business leaders and dozens of ministers from African states. Erdoğan visited Angola, Nigeria and Togo the same month to boost Turkey’s relations with the continent.

All these visits and summits have helped Turkey grow its ties with Africa, with the volume of bilateral trade between Turkey and Africa rising from $5.4 billion in 2003 to $25.3 billion in 2020. During this time Turkish foreign direct investment (FDI) has increased from $100 million to $6.5 billion.

Energy, construction, agriculture, cement, steel, textiles, household goods and electronic devices are the main sectors for developing trade and investment between Africa and Turkey, but Turkey’s focus has been shifting to defense exports to the continent.

The Republic of Turkey, the heir of the Ottoman Empire, which ruled North Africa for many centuries, has suddenly discovered the African continent after a 100-year hiatus.

Since President Erdoğan’s ruling Justice and Development Party (AKP) declared 2005 “The Year of Africa” and Turkey was accorded observer status by the AU the same year, the Turkish presence has become more visible across the continent. Erdoğan has made more than 50 trips to Africa and visited in excess of 30 countries since 2004.

Affordably priced, high-quality Turkish products have filled African markets over the past two decades, and Turkish construction firms have completed many mega projects such as East Africa’s biggest stadium — the Kigali Arena in Rwanda — and the Olympic swimming pool in Senegal. Turkey is the second-biggest investor in Ethiopia with investment capital of $2.5 billion. Turkish government-funded NGOs are busy spending millions of dollars for charity projects across the continent, but Ankara’s Africa foreign policy has been shifting from a human-centered approach to defense and security over the last few years.

The Turkish president’s long-term ambitions behind his Africa strategy were questioned when Turkey involved itself in the conflict in Libya. Many reports claim that Turkish drones were used in Tigray after Ethiopian Prime Minister Abiy Ahmed visited Turkey in August of this year and signed a military cooperation agreement with Ankara, and Nigerian customs officials have seized many illegal arms shipments on Turkey-bound vessels in the port of Lagos since 2017. Reuters reported in October that Ethiopia, along with Morocco, had already bought Turkish-made Bayraktar TB2 drones, which have also been sold to Azerbaijan, Poland and Ukraine. The conflict in the Horn of Africa helps Erdoğan sell arms in the region. Abey is looking for Turkey’s help to counter the Sudan-Ethiopia border dispute and the Tigray conflict. Fighters from Tigray, Ethiopia’s northern region, have been threatening the capital, Addis Ababa. The conflict in Ethiopia has left thousands dead and forced more than 2 million people from their homes. Turkey runs it biggest military base in Somalia. The UAE, Saudi Arabia and Egypt are not happy with Turkey’s military presence in the region since the Red Sea and the Bab al-Mandab Strait constitute a vital strategic link in the maritime trade route between the Mediterranean Sea and the Indian Ocean via the Red Sea and the Suez Canal.

Nigerian President Buhari, who attended the summit last week, also signed several trade and defense agreements with Turkey. Boko Haram killed thousands people in the northern part of the country in recent months, and Nigerian government officials say they need Turkey’s assistance. Buhari’s spokesman, Garba Shehu, said in a Facebook post that Turkish technology, be it in the form of drones or even through the supply or manufacture of military ordnance in Nigeria, will surely quicken the process and efforts to “rid Nigeria of pockets of terrorists and the menace of kidnappers and bandits…”

Policymakers define “hawks” as those who advocate an aggressive foreign policy based on strong military power and “doves” as those who try to resolve international conflicts through peace. Erdoğan’s recent Africa policy indicates that he is pursuing a hawkish approach to Africa as he takes advantage of the conflict in Libya, the Horn of Africa and Nigeria.