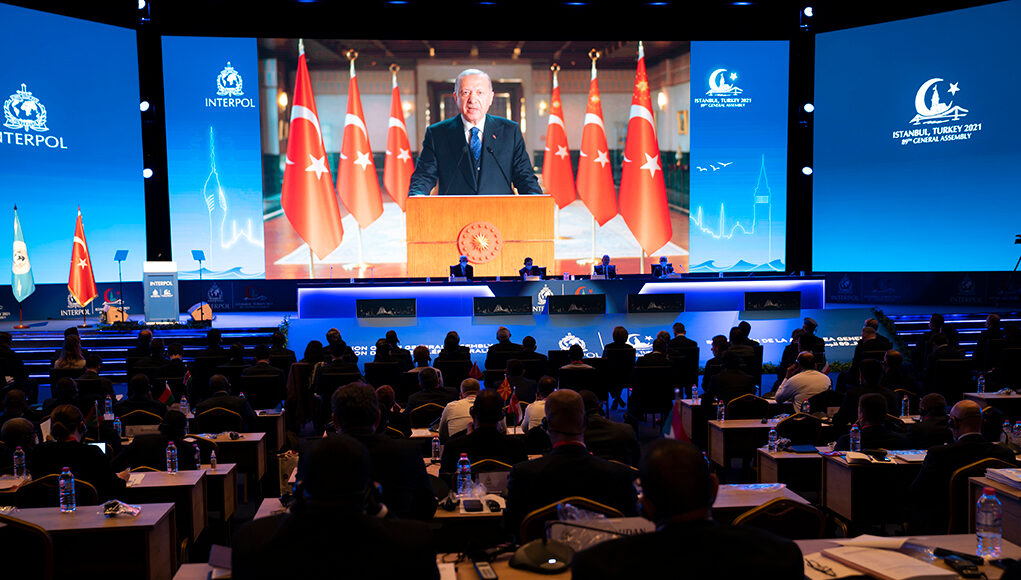 We will use the INTERPOL General Assembly, which began in İstanbul on Tuesday, to persuade officials and delegates to take a stance against the Gülen movement, Turkey’s Interior Minister Süleyman Soylu told Turkish media, the Stockholm Center for Freedom reported.

Speaking to journalists about the International Criminal Police Organization’s general assembly, Soylu said INTERPOL has been rejecting Turkey’s Red Notice requests since an abortive coup on July 15, 2016 that his government blames on the Gülen movement.

“It is not difficult to guess that this is an international position,” Soylu said. “We will take the INTERPOL meeting as an opportunity to … talk about our requests.”

A Red Notice is a request to locate and provisionally arrest an individual pending extradition.

In a video address to the meeting, Turkish President Recep Tayyip Erdoğan said his government expected the same level of cooperation that they have enjoyed in criminal cases from the INTERPOL Secretariat and member states in terrorism-related cases, too.

“We expect strong solidarity especially in the case of FETÖ [a derogatory acronym used to refer to the Gülen movement as a terrorist organization] fugitives and the leaders of the separatist organization [referring to the outlawed Kurdistan Workers’ Party (PKK)], Erdoğan said.”

Erdoğan has been targeting followers of the Gülen movement, a faith-based group inspired by Turkish cleric Fethullah Gülen, since the corruption investigations of December 17-25, 2013, which implicated then-Prime Minister Erdoğan, his family members and his inner circle.

Dismissing the investigations as a Gülenist coup and conspiracy against his government, Erdoğan designated the movement as a terrorist organization and began to target its members. He locked up thousands including many prosecutors, judges and police officers involved in the investigations as well as journalists who reported on them.

In an apparent reference to the rising criticism against the abuse of INTERPOL by authoritarian regimes to target their critics abroad, Erdoğan criticized what he called interference from some Western countries and international organizations in INTERPOL’s work. “It is important for INTERPOL to support the fight against terrorism unconditionally, without adjusting its approach based on the views of the member states,” he said.

A total of 319,587 people were detained and 99,962 arrested in operations against supporters of the Gülen movement since the abortive putsch.

According to Soylu, despite the fact that only 20 Red Notices issued in response to Turkey’s requests were cancelled from 1996 to 2016, the number of cancelled Red Notices had spiked to 374 since 2016.

In the first day of the general assembly, Soylu met with INTERPOL President Kim Jong Yang as well as his counterparts from South Africa, Angola, Azerbaijan, Nigeria and Serbia.

Representatives from more than 160 countries, including 16 ministers, are attending INTERPOL’s 89th General Assembly, which will also see elections for new members of the Executive Committee, including the post of president.

Representatives of countries like China and the United Arab Emirates are bidding for top posts in the French-based policing body. Critics contend that if these candidates win, instead of hunting down drug smugglers, human traffickers, war crimes suspects and alleged extremists, their countries would use INTERPOL’s global reach to apprehend exiled dissidents and even political opponents at home.

According to a report by the Stockholm Center for Freedom, the Turkish government under President Erdoğan has used the International Notice System, such as Red Notices and diffusions, to target political opponents who have done nothing more than criticize the government.

Similarly, it has also abused INTERPOL’s Stolen and Lost Travel Documents Database by filing tens of thousands of notifications for critics and opponents who, in many instances, were not even aware that their passports had been invalidated.