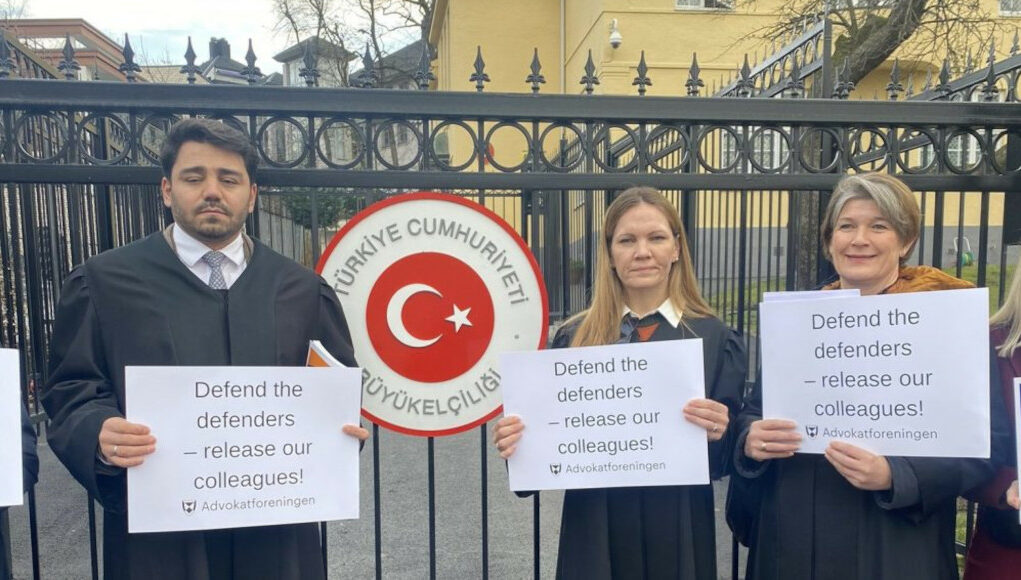 Lawyers in the Netherlands, Norway and Belgium demanded the immediate release of imprisoned lawyers affiliated with the now-closed Progressive Lawyers Association (ÇHD). During the demonstration Norwegian lawyers said they demanded the release of their colleagues who had been imprisoned for doing their job and exercising their right to freedom of expression.

Elsa Leona McClimans, chair of the Norwegian Bar Association, said lawyers did not normally wear their robes at demonstrations but that they had made an exception for such a significant case.

The ÇHD was closed by a government decree in November 2017.

The prosecutor is requesting prison sentences ranging from seven-and-a-half years to 53 years for the 22 lawyers.

The prosecutor dropped the charges against Ebru Timtik, a previously imprisoned lawyer who died during a hunger strike in September 2020.

Timtik and her colleague Aytaç Ünsal were arrested in September 2018 for alleged membership in the outlawed Revolutionary People’s Liberation Army/Front (DHKP/C), which is recognized as a terrorist organization by Turkey, the US and the EU.

They went on a hunger strike in April 2020 demanding a fair trial. A few days after Timtik’s death, Ünsal was released from prison for reasons of health.

On March 20, 2019 the Istanbul 37th High Criminal Court had sentenced Timtik to 13 years, six months and Ünsal to 10 years, six months. According to the ruling the two were accused of “communicating the organization’s messages to captured members and acting as couriers.”

Timtik and Ünsal had taken on important cases such as a mining disaster in Soma that took the lives of 301 miners; the death of Berkin Elvan, a 15-year-old boy who was hit on the head with a teargas canister fired by a police officer during the June 2013 anti-government Gezi protests; and the death of Engin Çeber in prison due to torture.

After her death, special rapporteurs from the UN Human Rights Council issued a statement condemning Timtik’s preventable death. They called on the Turkish government to release human rights defenders.

The statement, which was issued by 10 special rapporteurs, reads: “No one should have to die in pursuit of a fair trial; it is a fundamental human right. This is an utter waste of a human life, and we are greatly dismayed at the death of this, courageous woman human rights defender, as well as the circumstances that led to her death.”

According to a statement by the Arrested Lawyers Initiative, 450 lawyers in Turkey have been sentenced to 2,786 years in total on trumped-up charges of terrorism since a coup attempt in July 2016.