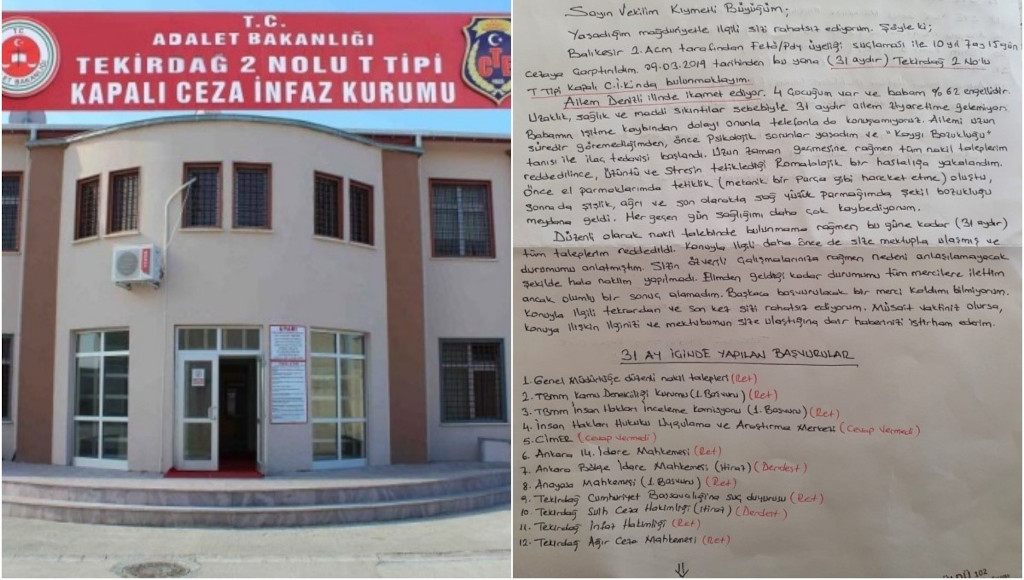 Erkam Özkaya, a father of four arrested for links to the Gülen movement, said he hadn’t seen his family for more than two years due to the distance between his prison and family home, in a letter to Peoples’ Democratic Party (HDP) deputy and human rights defender Ömer Faruk Gergerlioğlu, the Stockholm Center for Freedom reported.

Gergerlioğlu shared part of the letter on Twitter, saying authorities had not responded to Özkaya’s request to be transferred to a prison closer to his family. Özkaya appealed to parliament’s Human Rights Committee and several other government offices; however, his petitions went unanswered.

Özkaya was arrested in March 2019 and put in pretrial detention in western Tekirdağ province, after which he was handed down a 10-year, seven-month sentence. Özkaya’s family lives in Denizli, nearly 500 kilometers from the prison.

His family is unable to travel to see Özkaya due to the distance and financial problems. Özkaya is also unable to see his disabled father because he is not fit to travel. They can’t speak on the phone, either, because the father is hard of hearing.

Turkish President Recep Tayyip Erdoğan has been targeting followers of the Gülen movement, a faith-based group inspired by Muslim cleric Fethullah Gülen, since the corruption investigations of December 17-25, 2013, which implicated then-Prime Minister Erdoğan, his family members and his inner circle.

In his letter Özkaya said he had developed an anxiety disorder because of the emotional stress he was under from not being able to see his children. “The stress and sadness also triggered an autoimmune disease,” said Özkaya. “I can’t move my fingers because they are swollen and disfigured.”

According to a statement from Turkish Interior Minister Süleyman Soylu on February 20, a total of 622,646 people have been the subject of investigation and 301,932 have been detained, while 96,000 others have been jailed due to alleged links to the Gülen movement since the failed coup. The minister said there are currently 25,467 people in Turkey’s prisons who were jailed on alleged links to the movement.