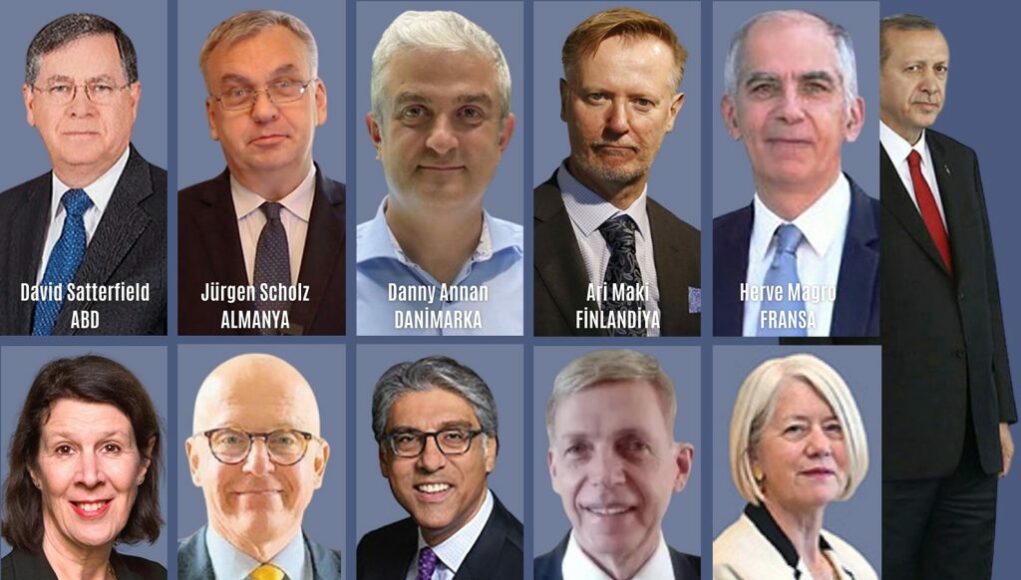 Turkish officials did not invite 10 Western ambassadors whose call for the release of a jailed businessman brought their countries to the brink of a diplomatic crisis with Turkey to an event at the presidency marking Republic Day, the Kronos news website reported.

Turkey celebrated the 98th anniversary of the establishment of the Turkish Republic on Friday, with official and public ceremonies taking place in Ankara and across the country.

A ceremony was held at the presidential palace in Ankara to mark Republic Day to which the ambassadors would normally have been invited. However, the 10 embassies were informed before the ceremony that they would not be invited to the Republic Day ceremony apparently because of the recent tension caused by their call for the release of Osman Kavala from jail.

The diplomatic standoff began when the 10 embassies — including those of Germany, France and the US— issued an unusual statement on Oct. 18 calling for the “just and speedy” resolution of the legal case against Kavala.

The 64-year-old civil society leader and businessman has been in jail without a conviction for four years.

President Recep Tayyip Erdoğan, who had originally threatened the ambassadors last Thursday and then doubled down — declaring the 10 ambassadors persona non grata — in televised comments on Saturday, on Monday announced, after a cabinet meeting at which his ministers reportedly advised him about the economic dangers of escalating tensions with some of Turkey’s closest allies and trading partners, that the 10 ambassadors had learned their lesson and “will be more careful now.”

Erdoğan’s change in attitude, which came after identical statements were issued by the US and some other countries saying they respected a UN convention that required diplomats not to interfere in the host country’s domestic affairs, was widely considered by international media outlets as a “step back” on the president’s part.

Supporters view Kavala as an innocent symbol of Erdoğan’s growing intolerance of political dissent since surviving a failed military putsch in 2016.

But Erdoğan accuses Kavala of financing a wave of 2013 anti-government protests and then playing a role in the coup attempt.

Kavala’s case could prompt the Council of Europe human rights watchdog to launch its first disciplinary hearings against Turkey at a four-day meeting ending on December 2.

The ECtHR ruled in December 2019 that the prolonged pretrial detention of Kavala was in violation of the European Convention on Human Rights and ordered his immediate release. But Turkey has failed to abide by the ruling despite repeated calls by the Council of Europe’s Committee of Ministers.