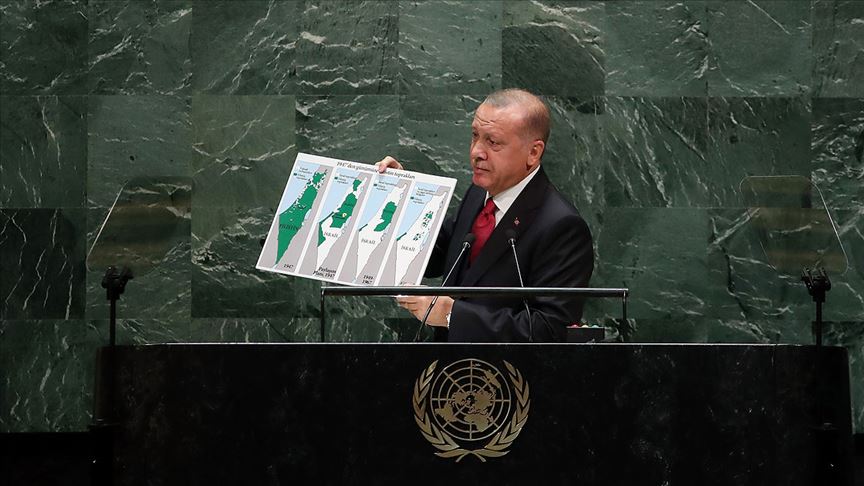 Turkish President Recep Tayyip Erdoğan confirmed at the 76th UN General Assembly on September 21 Turkey’s plans to ratify the Paris Agreement on climate change in parliament. Turkey remains the only member of the Organisation for Economic Co-operation and Development (OECD) and G-20 country that has yet to sign the pact. Erdoğan plans to sign the treaty before a UN climate summit to be held in Glasgow, Scotland, from October 31 to November 12; however, many Turks remain skeptical that Erdoğan’s Justice and Development Party(AKP) will make any serious effort to combat climate change.

Among the 197 other countries that signed the Paris Agreement in 2015 were Eritrea, Iran, Iraq, Libya and Yemen. These countries, however, have yet to ratify the treaty. Turkish leader Erdoğan has during his 18-year-long rule received fierce criticism from environmentalists over the destruction of millions of trees and huge amounts of agricultural land to complete mega construction projects across Turkey including malls, housing projects, roads, bridges and airports. The actions of the Erdoğan government, which continues to issue mining licenses in forests after already having carelessly destroyed vast green areas, are inconsistent with the words of Erdoğan, who at the UN General Assembly stated, “While the earth embraces millions of living species on its soil, it only expects us to respect the balance of nature in return for this generosity.” Erdoğan mentioned that Turkey was one of the first countries to sign the Paris Agreement but that his government has yet to ratify it due to the unfairness of the obligations, considering the world’s biggest polluter did not make the biggest contribution to the fight against climate change. He mentioned that the responsibility lies with all nations to take action against climate change as we are all affected by it.

Most people around the world believe that climate change is a major cause of natural disasters and hence a cause for concern. On the other hand, there are people around the world who believe the notion of climate change is a “hoax.” Regardless of the differing opinions, there remains a nearly universal consensus among scientists globally that human activity is at the root of climate change, while the UN reports that increasingly extreme weather conditions have caused a surge in natural disasters over the last 50 years. International bodies and developed countries have been taking action against climate change for the last three decades. Of course, efforts to combat global climate change did not start with the Paris Agreement but with US President George H.W. Bush, who, joined by 107 other heads of state, adopted a series of environmental agreements, including the United Nations Framework Convention on Climate Change (UNFCCC), an international treaty that remains in effect today. Participating countries also agreed to meet annually at a Conference of the Parties (COP) to take action against climate change.

The Kyoto Protocol, adopted in 1997 at COP 3 in Japan, was an important environmental treaty to reduce greenhouse gas emissions. The United States, considered a major polluter, initially signed but failed to ratify the treaty. President George W. Bush argued that the agreement would hurt the US economy since developing nations such as China and India were not included. Finally, the Paris Agreement adopted by 196 parties at COP 21 in Paris on December 12, 2015 and entering into effect on November 4, 2016, became a new, comprehensive climate treaty. This legally binding international treaty on climate change includes the big emitters — China, India and the United States — with the intent to resolve the issue of their greenhouse gas emissions and  to limit global warming to well below 2, preferably 1.5, degrees Celsius. The Kyoto Protocol set forth emission reduction targets for developed nations only, but the Paris Agreement requires all countries, regardless of national wealth, to do their part in reducing greenhouse gas emissions.

Then-US President Donald Trump claimed climate change was a “hoax” and officially pulled the US out of the Paris Agreement, which became effective on November 4, 2020. The current president, Joe Biden, on his first day in office sent a letter to the United Nations, and the US was subsequently re-entered into the Paris Agreement, on February 19, 2021

Turkey is a developing country, and its greenhouse gas emissions (GHG) are — per capita — below the G-20 average, but its GHG have more than doubled since 1990 due to industrialization. Turkey’s target is to reduce its greenhouse gas emissions by up to 21 percent by 2030, but the Climate Transparency Report 2020 indicates that Ankara needs a more ambitious plan if it is to reach its emissions target. “With rapidly falling costs for wind and solar energy, Turkey’s intention to increase domestic coal consumption to secure its energy independence could be achieved through renewable energy instead, with additional public health co-benefit,” the report said in encouraging Erdoğan’s government to look toward renewable energy. The transparency report also mentioned that as of July 2020, Turkey had 32 GW of new coal power capacity planned.

Erdoğan’s announcement of the Paris Agreement ratification comes after recent wildfires that destroyed tens of thousands of hectares of forests in Turkey’s Aegean and Mediterranean regions, while heavy floods in its Black Sea region left many dead and a large number of villages completely destroyed. The Yuvam Dünya (My Home World) Association together with KONDA Research and Consultancy recently published a joint “Climate Change Perception in Turkey Survey” which indicates that around three-quarters of the Turkish population has climate change awareness, understanding the impact of climate change on weather events and nature, Bianet’s English service reported. Aslı Pasinli, the general manager of World Wildlife Fund for Nature (WWF) Turkey, and Özlem Katisöz, the climate and energy policy coordinator for Turkey at the Climate Action Network (CAN), as well as other NGO representatives welcomed Erdoğan’s Paris Agreement decision. However, ecofeminist Süheyla Doğan, the co-spokesperson for the Ecology Union, said Erdoğan aimed to protect his prestige at the UN, while opposition Iyi (Good) Party MP and former ambassador Ahmet Erozan tweeted that “the Turkish President has just come to the realisation that the Paris Climate Change Convention must be ratified in order to benefit from the EU’s Green funds and other international private/public climate funds.”

Turkey is located in the Mediterranean, which is a global warming hotspot. Time will tell whether Erdoğan is serious about his climate change action plans or not, but election surveys indicate that support for Erdoğan is fast declining and that he desperately requires the support of millions of teens who will be voting for the first time in the June 2023 presidential election and who will in the future be increasingly affected by the impact of climate crises. Turkey has recently experienced some of its worst fires and floods in recent history as well as severe drought, while Erdoğan’s government continues investing in mega construction and mining projects at the expense of a green economy.