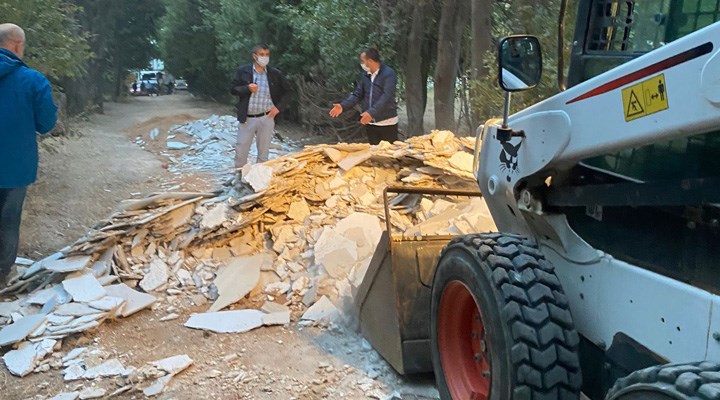 Heavy equipment sent by a district municipality run by the ruling Justice and Development Party (AKP) early on Tuesday dumped rubble in several areas of İstanbul’s Validebağ Grove, which is classified as 1st-degree natural protected area, as citizens tried to prevent it, local media reported.

The equipment that entered the grove, which is located in Üsküdar and covers an area of 354,000 square meters, the second biggest green space on the Asian side of İstanbul, was accompanied by officials from the AKP-run Üsküdar Municipality and scores of police officers to block resistance from citizens.

The development was announced on social media by the Validebağ Volunteers Association, the members of which have been protesting for over three months against a municipal project concerning the grove that could cause environmental destruction in the area, according to Turkish media reports.

“Dawn raid on Validebağ! Üsküdar mayor Hilmi Türkmen, accompanied by police, slaughters nature and the law! We won’t allow the mentality that is turning the grove into a garbage dump. Not on our watch!” the association tweeted under the hashtag #ÜBValidebağdanDefol (Üsküdar Municipality get out of Validebağ).

Şengül Kılıç, an association member, on Tuesday told the Birgün daily that five or six trucks entered the grove from three different entrances at around 5 a.m., adding that some 200 citizens were still in the area and continue resisting.

When citizens presented the municipal officials with a document showing a decision by the General Directorate of Cultural Heritage and Museums stating that the Validebağ Grove is classified as 1st-degree natural protected area and therefore cannot be a construction site, the officials disregarded it, the Birgün report said.

İbrahim Kaboğlu, a professor of constitutional law and an İstanbul deputy for the main opposition Republican People’s Party (CHP), on Tuesday posted a tweet emphasizing that the Üsküdar Municipality was committing a crime and calling for public support for those resisting its project in the Validebağ Grove.

Journalist Berkant Gültekin also shared two photos on Twitter, one showing Culture and Tourism Minister Mehmet Nuri Ersoy and Trade Minister Mehmet Muş, who are accompanying President Recep Tayyip Erdoğan during a visit to the US, taking an early walk in New York’s Central Park and the other showing the Validebağ Grove covered in rubble.

“This is the summary of the mindset and moral understanding of those in power who benefit from all the blessings of the world and deem the poorest living conditions proper for people in Turkey. … I wish you had left some green areas in İstanbul, too, so that morning walks could stop being only the habit of the lucky few [Turks] who can go to New York,” Gültekin said.

Under the ruling AKP, in power since 2002, Turkey has seen rapid modernization. Critics argue that the country is sacrificing the environment as it develops, with forests among natural resources destroyed for profit by companies close to Erdoğan.