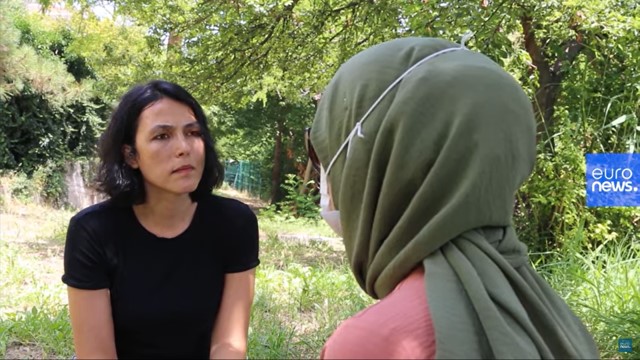 The story of a woman who sought asylum in Greece together with her family but was returned to Turkey reveals the ordeal of refugees who are being pushed back in increasing numbers, the Stockholm Center for Freedom reported, citing Euronews Turkish.

Speaking to Dilek Gül of Euronews Turkish, the woman, identified as E.K., said after crossing the border and walking for four hours, her family and the group they were traveling with came across the Greek police and told them they wanted to seek political asylum. Yet, the police confiscated their IDs and mobile phones and handed them over to two armed, masked men. They were then taken to a forest where only the women were strip-searched.

According to E.K. they were abused during the search. “They touched the vaginal areas with their fingers … all this happened in front of others, including children,” she said. They were then returned to Turkey, where her husband was arrested and she was conditionally released.

E.K.’s husband was convicted of membership in a terrorist organization for his alleged links to the Gülen movement. He was in prison for a year and was released pending appeal. After his sentence was upheld by the Supreme Court of Appeals, the family decided to leave the country.

“He didn’t want to go back to prison,” E.K. said. “Since he was in prison before, he knows how bad the conditions are there.”

They wanted to travel to another country in Europe through Greece, but they had to cross the border illegally because the government refuses to issue them passports.

E.K. herself is a former public servant fired from her job over alleged Gülen links. Although no explanation was provided, she guesses it was because of an account she had in the now-closed Bank Asya, one of Turkey’s largest commercial banks at the time, which was affiliated with followers of the movement.

In the aftermath of the abortive putsch, more than 130,000 public servants, including 4,156 judges and prosecutors, as well as 29,444 members of the armed forces, were summarily removed from their jobs for alleged membership in or relationships with “terrorist organizations” by emergency decree-laws subject to neither judicial nor parliamentary scrutiny.

Former public servants were not only fired from their jobs; they were also banned from working again in the public sector and getting a passport.

“What we went through is inhuman,” E.K. said. “We are poor people who risk death to seek asylum and they give us another trauma. As a European country Greece shouldn’t have been this barbaric.”

In a report published last month Amnesty International harshly criticized the Greek government and the European Union’s border agency Frontex for violent and illegal detention of refugees and pushbacks.

“It is clear that multiple arms of the Greek authorities are closely coordinating to brutally apprehend and detain people who are seeking safety in Greece, subjecting many to violence, then transferring them to the banks of the Evros River before summarily returning them to Turkey,” Adriana Tidona, migration researcher for Europe at Amnesty International, said. “Our research shows that violent pushbacks have become the de facto Greek border control policy in the Evros region. The level of organization needed to execute these returns, which affected around 1000 people in the incidents we documented, some numerous times and sometimes via unofficial detention sites, shows just how far Greece is going to illegally return people and cover it up.”

According to the report pushbacks are not only taking place in border areas. People are also being apprehended and detained far into the Greek mainland before being transported to the Evros region to be illegally returned to Turkey.

“All of the people we spoke to were pushed back from areas where Frontex has significant numbers of staff,” Tidona said. “The agency cannot therefore claim to be ignorant of the abuses that we, and many others, have documented. Frontex has the duty to prevent human rights violations, if they cannot do this effectively, they should withdraw or suspend operations in Greece.”

Amnesty called on the European Commission to launch infringement proceedings against Greece “for its violation of EU asylum and fundamental rights law.”