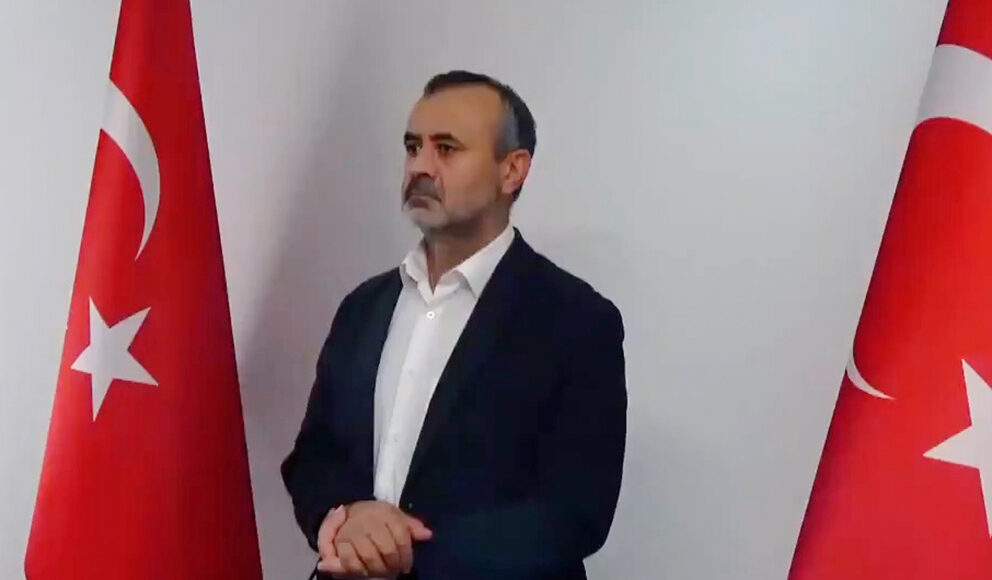 Reyhan İnandı, the wife of a Turkish-Kyrgyz educator whose rendition from Kyrgyzstan by Turkey’s National Intelligence Organization (MİT) was acknowledged by Turkish President Recep Tayyip Erdoğan on Monday, said photos showing her husband in handcuffs exposed the torture he has undergone, the Bold Medya news website reported on Tuesday.

“We were shocked,” the wife of Orhan İnandı was quoted as saying. “It’s obvious they tortured my husband. He has lost so much weight.”

Reyhan İnandı said the photos of her husband flanked by Turkish flags was announcing the torture to the world, labeling the affair “a disgrace for Turkey.”

İnandı, the founder and president of the Turkish-Kyrgyz Sapat school network operating in Kyrgyzstan, went missing on May 31 and was feared to have been abducted by MİT due to his alleged links to the Gülen movement, a faith-based group inspired by Muslim cleric Fethullah Gülen. The movement is labeled as a terrorist organization by the Turkish government and accused of masterminding a failed coup in Turkey in July 2016. Both Gülen and his followers strongly deny any involvement in the abortive putsch or any terrorist activity.

Erdoğan on Monday acknowledged that İnandı was abducted by Turkish spies and brought to Turkey, praising their efforts in the rendition.

Photos of İnandı in handcuffs with Turkish flags prompted allegations of torture due to İnandı’s visible weight loss and swollen right hand.

Based on the state-run Anadolu news agency’s video of İnandı with a Turkish flag on either side while covering his rendition on Monday, Solidarity with OTHERS, a nongovernmental organization that mainly consists of political exiles from Turkey, claimed that the educator had been exposed to torture.

“Most visibly, his right arm is most probably broken. … Notice his right hand, how he cannot hold it up… It is swollen and the skin is darker. A clear sign of torture,” the organization said in a tweet.

According to Şebnem Korur Fincancı, a doctor of forensics and the head of the Human Rights Foundation of Turkey (TİHV), the photos of İnandı point to torture, either torture by hanging or direct blows to the arm.

“We see that one hand is larger than the other. We see a change of color on the larger hand. It might be due to some direct blows to the hand. Internal bleeding or edema are also possibilities,” Fincancı said and added, “But the arm with the larger hand also looks larger. It looks like (the arm) has swollen as a whole. He supports that hand as if there is a loss of strength. The swollen hand stands loose.”

Fincancı said such a condition could also be caused by positional, strappado-like torture methods, throughout which, standing in a fixed position, either by hanging or other means, damage the nerves of the victim. These positional torture methods might have also been accompanied by direct blows, according to Fincancı.

“The person with this tortured hand had been in Kyrgyzstan for more than 30 years, and the only thing he had done was teach. A photo that speaks volumes,” Adem Yavuz Arslan, a Turkish journalist in exile, tweeted on Tuesday.

“All this time I was given the hope that my husband was in Kyrgyzstan. I had really trusted the Kyrgyz government. I had trusted the ministers who had spoken with me. I believed everything I was told [by them]. The result is a huge disappointment. My family and I are heartbroken. Twenty-six years of work shouldn’t have yielded this result. I have ended up experiencing what I feared the most,” Rehyan İnandı told Bold Medya.

A recent report by Freedom House on global transnational repression also revealed the intensity, geographic reach and suddenness of the Turkish government’s campaign targeting dissidents abroad, noting that Turkey has become number one among countries that have conducted renditions from host states since 2014.

According to recent official statements by its interior ministry, Turkey has sent 800 extradition requests to 105 countries since the coup attempt, and some 110 alleged members of the Gülen movement have been brought back to Turkey as part of the government’s global campaign.

Since it started in 2014 Hakan Fidan, the head of MİT, has been in charge of the campaign at the request of Erdoğan.

Evidence gathered by investigations by experts and journalists suggests that Gülen movement members who have been rendered from various countries in abduction schemes designed by Fidan faced torture.

According to a joint letter written by four UN rapporteurs dated May 2020, the abductions carried out by MİT tend to follow a similar pattern. After Turkey fails to secure a legal extradition, authorities resort to illegal covert operations. Targeted individuals are placed under “around-the-clock surveillance, followed by house raids and arbitrary arrests in undercover operations by law enforcement or intelligence officers in plainclothes,” the letter explained.

Once arrested, the target is taken to an unmarked vehicle by force, after which they can remain forcibly disappeared for up to several weeks before deportation.

“During that period they are often subjected to coercion, torture and degrading treatment aimed at obtaining their consent on voluntary return and at extracting confessions that would inform criminal prosecution upon arrival in Turkey,” the letter said.

Turkish operatives tend to use a variety of torture methods to obtain these forced confessions, including food and sleep deprivation, waterboarding, electric shocks and beatings, the rapporteurs wrote in the letter based on personal testimonies.

“This is coupled with threats against lives, security and personal integrity of family members and relatives,” the UN rapporteurs said.