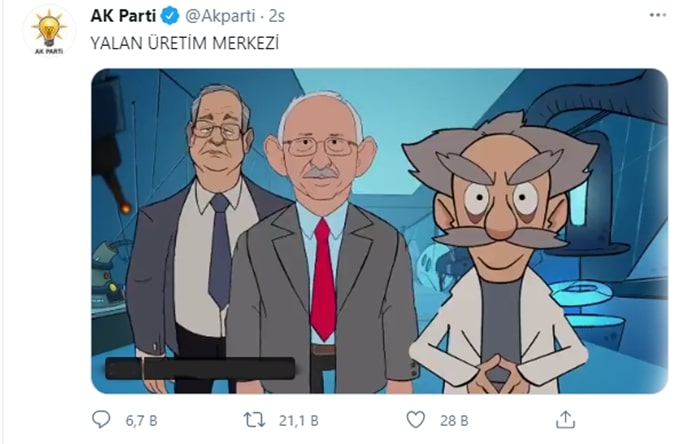 An animation video produced by Turkey’s ruling Justice and Development Party (AKP) targeting the country’s main opposition party has had the opposite effect since it made $128 billion in forex reserves that were sold from the Turkish Central Bank’s (TCMB) reserves in 2019-2020 a trending topic on Twitter.

In the video posted on Twitter, the Republican People’s Party (CHP) is portrayed as the “Lie Manufacturing Center.” CHP leader Kemal Kılıçdaroğlu is heard in the video ordering that lies be told about the AKP and constantly asking, “Where’s the $128 billion?” but no answer is provided to his question. The CHP is portrayed as making groundless accusations against the AKP government in the video.

Although President Recep Tayyip Erdoğan and his monetary policymakers are trying to downplay the issue, the public, experts and the CHP along with another opposition party, İYİ (Good) Party, have been calling on Erdoğan and his AKP government to explain what happened to the central bank’s $128 billion in foreign reserves.

The video has made the question about the sale of the foreign reserves once again a trending topic on Twitter in Turkey.

The president claimed in a statement in late February that a significant part of the forex reserves, which dropped sharply under the watch of his son-in-law and then-finance minister Berat Albayrak, were used to enable the country to overcome the pandemic with minimal damage.

“They’re hung up on where the money is. The money is in the people’s Treasury and the central bank. Nothing was lost,” Erdoğan also said on March 10, in reference to the opposition politicians, while addressing lawmakers from his AKP in parliament.

However, Erdoğan’s remarks didn’t reflect the truth, media reports said at the time, since the TCMB’s net forex reserves were at their lowest level since 2003 of $10.68 billion as of April 2, according to bank data, and its outstanding swaps stood at $41.116 billion, which meant the reserves were in deeply negative territory once the swaps were deducted.