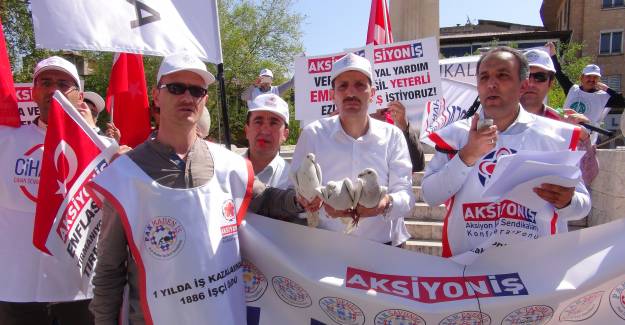 A UN agency setting labor standards has decided that the Turkish government violated UN conventions on labor by closing down trade unions and dismissing workers over alleged affiliation with the Gülen movement, a faith-based group accused by Ankara of masterminding an attempted coup in 2016.

The Aksiyon-İş Confederation, which was closed following the abortive putsch on coup accusations, submitted a representation in November 2017 to the International Labour Organization (ILO) pursuant to Article 24 of the ILO Constitution, alleging that Turkey violated the Freedom of Association and Protection of the Right to Organise Convention, 1948 (No. 87), and the Termination of Employment Convention, 1982 (No. 158).

Having reviewed the representation, the ILO Governing Body decided at its meeting in March 2019 to refer the representation concerning Convention No. 87 to the Committee on Freedom of Association, and to establish an ad hoc committee concerning Convention No. 158, and identify one member for each committee from each of the government, worker and employer constituents in line with ILO’s tripartite composition.

The committee decided that the closure of trade unions and dismissal of workers violated ILO Conventions, and accordingly requested the Turkish government to undertake a full, independent and impartial review with regard to all those workers on whom sanctions were imposed for their membership in the dissolved unions.

The closure of a trade union by an executive authority pursuant to a decree conferring to it full powers violates Article 4 of the ILO’s Convention No. 87, a fundamental convention.

The committee held that as Article 4 provides that any dissolution of workers’ or employers’ organizations could only be carried out by the judicial authorities, which alone can guarantee the rights of defense; such principle must apply to cases of closure even during the state of emergency.

It further underlined that the dissolution of trade union organizations constituted extreme forms of interference by the administrative authorities in the activities of organizations and should therefore be accompanied by all the necessary guarantees, which could only be ensured through a normal judicial procedure, which should also have the effect of a stay of execution.

The UN body noted that simply being a member of a trade union closed in this manner was considered as evidence of links of the individual with the FETO/PDY (a derogatory acronym designating the Gülen movement as a terrorist organization) as supporting the coup attempt and thus justifying their dismissal, and recalled that these trade unions had been constituted and were operating lawfully until the state of emergency.

The report stated that “the Committee concluded that these workers were punished for their membership in a trade union, without any need for proof of specific action or involvement or even knowledge that they may have had about a possible affiliation with a terrorist organization. In other words, these workers were punished for having exercised their right to join organizations of their own choosing guaranteed by Article 2 of Convention No. 87 without any possibility of review of their individual situation”, and added that “while the Committee noted the gravity of the situation in Turkey following the attempted coup, it nevertheless noted that the dismissal of the individual workers affiliated to Aksiyon-Is was due to their affiliation with the trade union confederation.”

The committee urged the Turkish government to take the necessary measures to ensure that the dissolution of trade unions pursuant to Decree-Law No. 667 be reviewed through the normal judicial procedures, which should also enable those unions to be able to be fully represented to defend their case, and further that a full, independent and impartial review be made with regard to all those workers on whom sanctions were imposed for their membership in the dissolved unions in order to determine whether, independently of their membership in such unions, they had carried out any unlawful activity that would justify their dismissal.

The committee also urged the Turkish government to ensure full reconsideration on the merits of those cases in which the applications were rejected, and to ensure this right of defense for those dismissed workers whose applications had not yet been examined and expected that the imprisoned trade unionists receive a swift and impartial trial and requested the government to submit copies of the relevant judgments to the Committee of Experts on the Application of Conventions and Recommendations (CEACR).

Turkey experienced a controversial military coup attempt on the night of July 15, 2016, that killed 251 people and wounded more than a thousand others. Turkish President Recep Tayyip Erdoğan immediately accused the Gülen movement, a faith-based group inspired by Turkish cleric Fethullah Gülen, of masterminding the coup attempt and started a huge crackdown the next morning that eventually led to the summary dismissal of more than 130,000 public servants, including 4,156 judges and prosecutors, as well as 20,610 members of the armed forces, for alleged membership in or relationships with “terrorist organizations” by emergency decree-laws subject to neither judicial nor parliamentary scrutiny. Gülen and the movement strongly deny involvement in the abortive putsch or any terrorist activity.

According to a recent UN report the Gülen movement “appears to have developed over decades and enjoyed, until fairly recently, considerable freedom to establish a pervasive and respectable presence in all sectors of Turkish society, including religious institutions, education, civil society and trade unions, media, finance and business.”