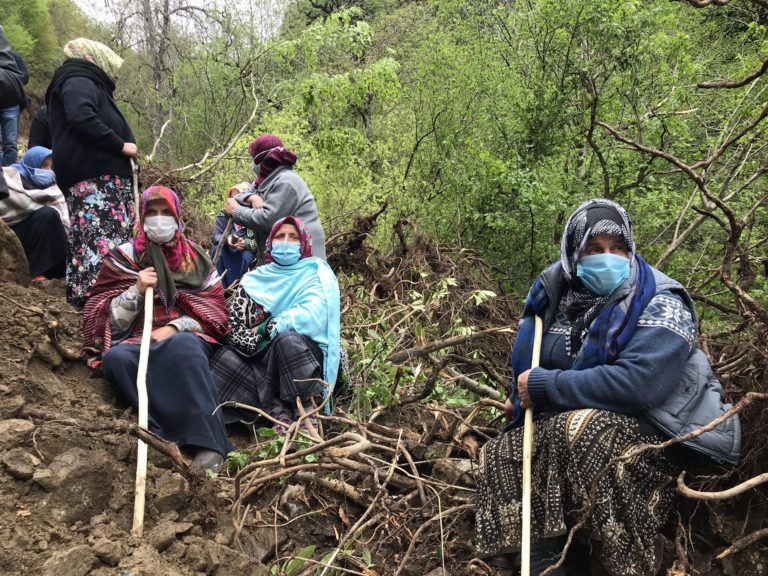 A group of villagers has been protesting the opening of a stone quarry by a pro-government company in northern Rize province, arguing that the project would harm their means of earning a living as well as natural resources in the region, Turkish media reported.

According to the reports nearly 16 million tons of stone for landfill in Rize city will be quarried by Cengiz Construction, a company with close ties to the ruling Justice and Development Party (AKP) that has undertaken numerous infrastructure projects over the past decade.

The quarrying in the İşkencedere Valley, located in İkizdere, started over a week ago, despite locals’ protests to save dense forest cover in the area, which is considered one of the most precious natural beauties of Turkey’s northeast.

Over the week gendarmes have used pepper spray against the protestors and detained more than a dozen of them, local media said, as the group –- most of them women –-  tried to prevent the work from proceeding by sitting in front of the heavy equipment, climbing trees and blocking the entrance to the valley with beehives.

The Federation of İkizdere Associations, which has played an important role in the villagers’ protests, says the project would harm the ecological system of the valley by reducing the amount of water in it and contaminating what’s left of it. It would also endanger agriculture and animal husbandry in the region, the main sources of income for the locals, the group adds.

Among those who support the villagers’ resistance are the main opposition Republican People’s Party (CHP), the pro-Kurdish Peoples’ Democratic Party (HDP) and the SOL (Left) Party as well as representatives from local nongovernmental organizations.

The quarrying has also been protested on Twitter, with a number of social media users speaking out against it under the hashtags #ikizderetasocağıolmasın (İkizdere shouldn’t be a stone quarry) and #ikizderesahipsizdegildir (İkizdere isn’t unattended).

Turkish popstar Tarkan was among those who expressed solidarity with the locals. “My dearest hometown of Rize, my beloved İkizdere, my beloved townspeople! … I feel deeply your righteous rebellion in wanting to protect your nature and homeland, and I stand by you in this struggle of yours, with all my heart,” he tweeted.

“Those who deem these massacres proper for our beautiful country, just stop already! That’s enough!” Tarkan also wrote in a tweet where he shared video footage from the quarry.

Cengiz Holding first came to public attention in Turkey in late 2013, when Turkey was shaken by the news of two corruption investigations in which senior ruling AKP politicians were involved.

The company’s owner, Mehmet Cengiz, who has been awarded numerous public contracts — including the construction of İstanbul’s third airport — during the 18 years of AKP rule, was heard in wiretapped phone conversations cursing the Turkish people.

The opposition parties accuse Cengiz, among others, of bid-rigging and claim he is among Turkey’s biggest tax evaders.