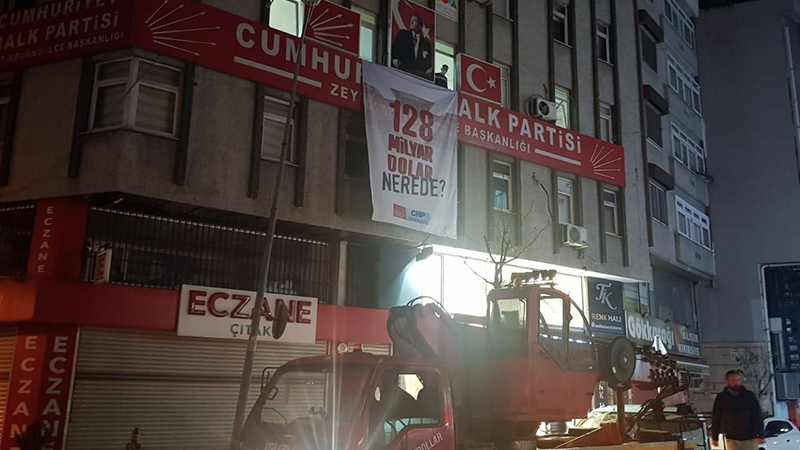 Hundreds protest in Turkey in support of Iranian women

Turkish police raided local branches of the main opposition Republican People’s Party (CHP) in the early hours of Wednesday to take down banners questioning $128 billion in forex reserves that was sold from the Turkish Central Bank’s (TCMB) reserves in 2019-2020, the Stockholm Center for Freedom reported.

According to Turkish media reports, a prosecutor ordered the removal of the CHP banners on claims of insulting Turkish President Recep Tayyip Erdoğan.

The CHP launched a campaign to raise public awareness about the sale of the forex reserves, asking “Where is the $128 billion?” Municipalities run by the CHP have erected billboards, while party branches, in line with the campaign, hung banners repeating the same question.

CHP leader Kemal Kılıçdaroğlu held President Erdoğan responsible for the police raids, tweeting, “… We are asking you [President Erdoğan] about the money [TCMB reserves] of the poor, people in need and orphans…”

Although President Erdoğan and his monetary policymakers are trying to downplay the issue, the public, experts and the opposition have been demanding to know where the $128 billion has gone.

The president claimed in a statement in late February that a significant part of the forex reserves, which dropped sharply under the watch of his son-in-law and then-finance minister Berat Albayrak, were used to enable the country to overcome the pandemic with minimal damage.

Albayrak oversaw a policy in which state banks sold some $128 billion in 2019-2020 to stabilize the Turkish lira. The central bank backed the interventions with swaps, and the bank’s net forex reserves subsequently tumbled by about three-quarters last year alone.

“They’re hung up on where the money is. The money is in the people’s Treasury and the central bank. Nothing was lost,” Erdoğan also said on March 10, in reference to the opposition politicians, while addressing lawmakers from his AKP in parliament.

However, Erdoğan’s remarks didn’t reflect the truth, media reports said at the time, since the TCMB’s net forex reserves were at their lowest level since 2003 of $10.68 billion as of April 2, according to bank data, and its outstanding swaps stood at $41.116 billion, which meant the reserves were in deeply negative territory once the swaps were deducted.