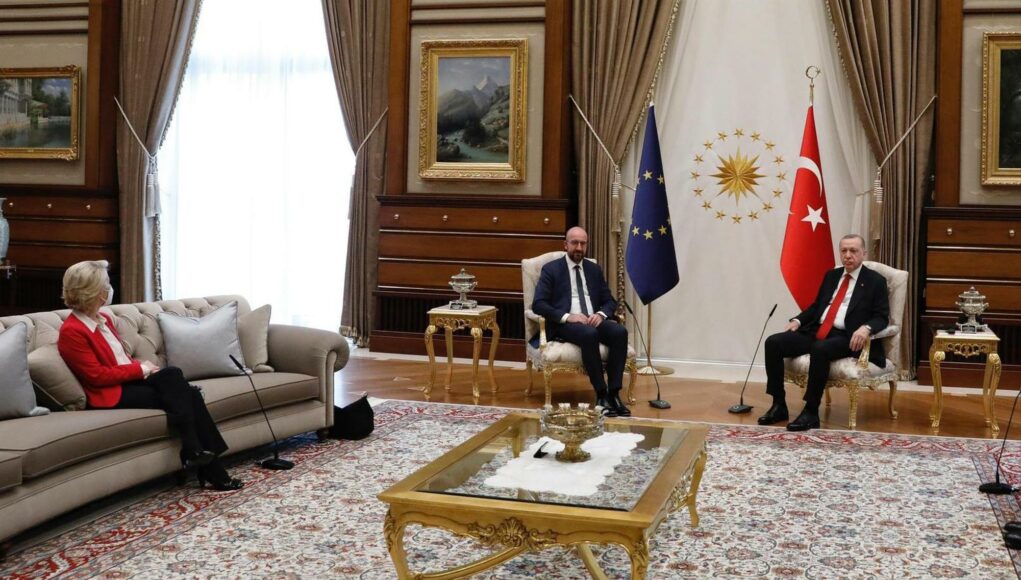 The furore — dubbed “sofagate” online — has sparked a slew of accusations over Ankara’s attitude to women and the EU, sexism in Brussels, and internal political wrangling between the bloc’s institutions.

It all centered on an awkward moment at the start of talks between von der Leyen, European Council President Charles Michel and Turkish leader Recep Tayyip Erdoğan in Ankara on Tuesday.

While the two male leaders took the only two chairs, a blindsided von der Leyen was left standing before being ushered to a nearby sofa.

“EU-Turkey relations are crucial. But EU unity and respect for human rights, including women’s rights, are also key,” Spanish MEP Iratxe Garcia Perez, the head of the Socialist & Democrats grouping in parliament, wrote on Twitter.

She said she had asked for a conversation with Von der Leyen and Michel “to clarify what happened and how to respect the EU institutions.”

That call was echoed by the leader of the conservative European People’s Party parliamentary bloc, Manfred Weber, who told Politico the trip to Ankara had become “a symbol of disunity” between the EU’s top officials.

The meeting with Erdoğan came at a delicate moment as the EU and Turkey look to rebuild ties rocked by renewed tensions last year.

Von der Leyen, the first female head of the European Commission, stressed Brussels’ concerns over women’s rights after Erdoğan withdrew from the Istanbul Convention on preventing violence against women and children.

Her spokesman hit out at the diplomatic faux pas but said she had pressed on with addressing the thorny issue of ties with Ankara rather than walking out of the meeting.

Turkey’s Foreign Minister Mevlüt Çavuşoğlu deflected blame from Ankara and said the seating arrangements were made “in line with the EU suggestion. Period.”

Michel drew flak in Brussels for seeming not to support his colleague and readily accepting the only available seat.

In a Facebook post he insisted “nothing is further from the reality or my deepest feelings” and said the “regrettable” scene was down to a Turkish protocol blunder.

The scandal drew complaints from across Europe over what was seen as only the latest example of bungled EU foreign policy efforts.

“We are dealing with interlocutors who know the value of symbols. We have to be much more firm.”