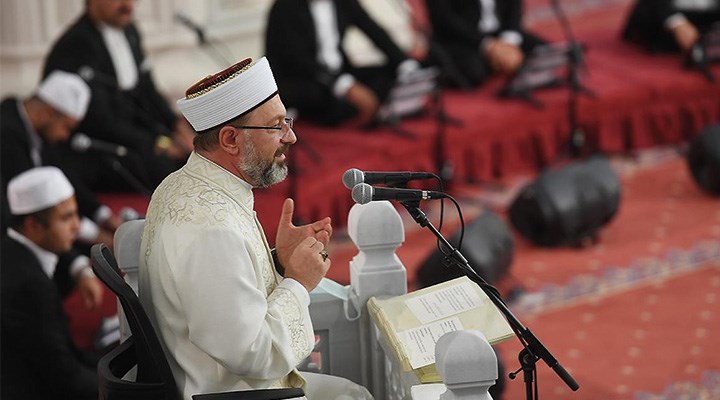 Turkey’s Directorate of Religious Affairs (Diyanet) has become an instrument for President Recep Tayyip Erdoğan’s government to silence dissent and cover up wrongdoing.

According to a report by the Stockholm Center for Freedom citing Duvar news website, Erdoğan has increased the budget of the Diyanet to support its influence at home and at abroad. During the 20-year rule of the Justice and Development Party (AKP), the Diyanet’s budget has increased nearly 2,000 percent.

In comparison, the Interior Ministry, which includes the Turkish National Police and the gendarmerie, has a budget of TL 10.6 billion, the office of the president TL 4.4 billion and the Ministry of Foreign Affairs TL 5.7 billion.

The Diyanet was established in 1924 shortly after the founding of the modern Turkish republic. Its purpose was to ensure proper religious education and the separation of religion and the state. The Diyanet also appoints imams and drafts weekly sermons for delivery in the nation’s mosques.

According to Süheyl Batum, a professor of constitutional law and former member of parliament, the Diyanet was established to help people understand Islam and its practices. “It was meant to ensure people had places to worship with educated clergy and to take care of the physical requirements of mosques,” he said.

The Diyanet is supposed to be apolitical, according to the constitution. But in recent years it has been increasingly politicized to the level that Erdoğan compared the staff and imams of the Diyanet to “members of the army” in 2018.

During a speech at an event titled “Meeting with Religious Officials,” Erdoğan expressed his gratitude to the Diyanet and its role in resisting a controversial coup attempt on July 15, 2016.

Political issues are also incorporated in weekly Friday sermons, attended by most Muslim men in Turkey.

“The topics for Friday sermons are all the same,” said Batum. “They praise poverty [as the country’s economic situation declines], and call on people not to challenge authority. They are completely in line with government policy and discourse.

The praise of poverty was met with outrage by critics as the Diyanet is known for using luxury cars purchased with taxpayer money and organizing events at luxury resorts.

Former deputy Dr. Özcan Yeniçeri said he had submitted several parliamentary questions concerning the finances of the Diyanet but never received an answer.

During recent protests at Boğaziçi University, the Friday sermons urged young people to stand behind their country and protect it from traitors.

Speaking to the Independent’s Turkish service, Hayri Kirbaşoğlu, a theology professor, said the sermons were moving away from religion and more towards politics. “Instrumentalizing Friday sermons for political gain will only increase social division,” he added.

Theologian İhsan Eliaçık said each sermon started with the sentence “During these trying times for our nation.” He said the sermons created an impression that people needed to be aware of traitors and enemies.

Another theologian, Cemil Kılıç, said Friday sermons were turning into political propaganda. According to a 2019 news report by Duvar, the Diyanet had issued sermons that were highly political, with some urging people to obey the head of state.

According to Kılıç most people who did not support the AKP stopped going to the mosque for these reasons. “If the imam refuses to give the sermon, then they are fired from their jobs,” he said. “There are voluntary inspectors from the Diyanet among the congregation who report back to it.”

In a highly controversial move, Erdoğan restored the status of Istanbul’s Hagia Sophia museum to that of a mosque with a presidential decree on July 13, 2020.

Critics have argued the conversion has long been a demand of the most ardent elements of Erdoğan’s religious and nationalist base. Dr. İştar Gözaydın said the move was Erdoğan’s gesture to his base to increase his popularity.

The newly appointed imam of Hagia Sophia, Mehmet Boynukalın, has made several controversial public statementssince he was named to that position.

He said the discussions of rising femicide in Turkey had caused enmity between men and women. Boynukalın said the punishment for murder, regardless of gender, should be the death penalty.

Referring to debates on the Convention on Preventing and Combating Violence Against Women and Domestic Violence, better known as the Istanbul Convention, a Council of Europe treaty to prevent and combat violence against women and domestic violence, Boynukalın said it was disruptive to the family unit.

Indeed, Turkey withdrew from the convention last week with a presidential decree.

Boynukalın has also targeted female politicians and writers to the extent that some journalists said he was acting like a minister of religious affairs.