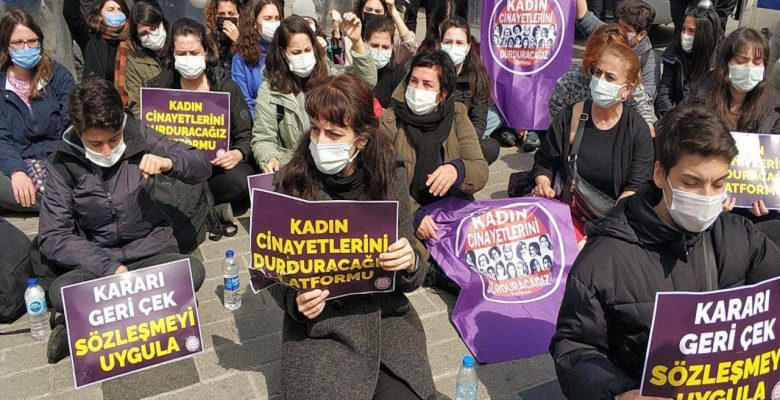 Dozens of women gathered in central Taksim Square in İstanbul on Monday to stage a protest against Turkey’s withdrawal from an international convention to combat domestic violence, demanding that the Turkish government restore its membership in the treaty.

Through a presidential decree early on Sunday, Turkey pulled out of the Convention on Preventing and Combating Violence Against Women and Domestic Violence, better known as the İstanbul Convention, a Council of Europe treaty to prevent and combat violence against women and domestic violence.

The women met at Taksim Square upon a call from the We Will Stop Femicide Platform to demonstrate against the move. When they faced police intervention, the women continued their demonstration with a sit-in. “Withdraw the decision, implement the convention,” chanted the women as they called on the Turkish government and President Recep Tayyip Erdoğan to restore the treaty.

There was heavy police presence in the area, and scuffles periodically took place between the police and the women’s rights activists.

Turkey had been debating a possible withdrawal from the agreement after an official in Erdoğan’s party raised dropping the treaty last year.

Since then, women have taken to the streets in cities across the country calling on the government to remain in the convention.

The 2011 İstanbul Convention, signed by 45 countries and the European Union, requires governments to adopt legislation prosecuting domestic violence and similar abuse as well as marital rape and female genital mutilation.

Rights groups accuse Erdoğan of taking mostly Muslim but officially secular Turkey on an increasingly socially conservative course during his 18 years in power.

Domestic violence is very common in Turkey, where at least 300 women were murdered last year, according to the We Will Stop Femicide Platform.