First in a series of reports prepared by SCF’s team of legal experts, the report provides an assessment of the role played by the HSK at various stages of Turkey’s political evolution since 2010 in order to show how this judicial body set up to ensure an independent judiciary has become a political instrument for placing the judiciary under the government’s control.

“Understanding the evolution of the HSK and the political developments that led to it are key to understanding the immense decay of the rule of law that Turkey has experienced since 2013,” said Dr. Merve R. Kayıkçı, research director at Stockholm Center for Freedom. “The HSK’s powers are so significant that, as scholar Thomas Giegerich puts it, ‘When the independence and impartiality of the [HSK] is jeopardized, so is the independence and impartiality of the Turkish judiciary as a whole’.“ 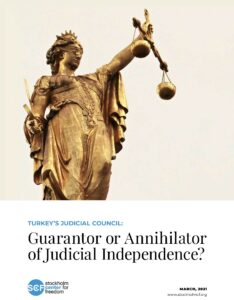 The report begins by analyzing the developments following the referendum of 2010 in respect to amendments concerning the composition and powers of the council. It then moves on to examine the impact of the December 2013 corruption investigations on the re-designing of the structure and powers of the HSYK by the government. It further explores the executive’s desperate efforts to take control of the council by exerting direct influence on the judicial election of October 2014. Finally, it looks at the impact of the constitutional amendments of the April 2017 referendum on the composition of the HSK, which have introduced an “a la Turca” executive presidential system.

In addition to examining the legislative and regulatory amendments relating to the HSK, the report also seeks to shed light on the background of some of the developments and underlying events within this period.

About the Stockholm Center for Freedom

SCF is a non-profit advocacy organization that promotes the rule of law, democracy and human rights with a special focus on Turkey.

Committed to serving as a reference source by providing a broad perspective on rights violations in Turkey, SCF monitors daily developments, documents individual cases of the infringement of fundamental rights and publishes comprehensive reports on human rights issues.

SCF is a member of the Alliance Against Genocide, an international coalition working to exert pressure on the UN, regional organizations and national governments to act on early warning signs and take action to prevent genocide.