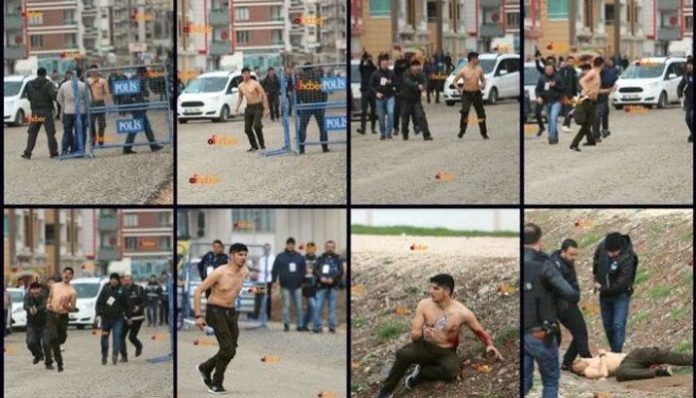 The first hearing in the trial of photojournalist Abdurrahman Gök, in which he faces 20 years in prison on charges of “membership in a terrorist organization” and “disseminating terrorist propaganda,” was held on Tuesday at the Diyarbakır 5th High Criminal Court, Deutsche Welle’s Turkish edition reported.

In 2017 Gök took a series of photographs showing a university student being shot to death by a police officer during Nevruz celebrations in Diyarbakır and faced an investigation a month later. In 2018 after a verdict of non-prosecution was issued in the case, Gök was the subject of another investigation and was interrogated by the police, during which he learned that his communications had been monitored by law enforcement for a period of time.

Gök was detained a week after the interrogation and was released pending trial.

Seeing that the charges against him are based on journalistic material he shared with his colleagues, Gök reasons that the investigation is really about the photos he took at the 2017 Nevruz celebrations.

An expert report drafted by the privately run National Criminal Bureau revealed in 2019 that Kemal Kurkut, the university student who was shot to death in 2017, was not killed by a stray bullet but was deliberately killed by the police officer.

The report claimed slow-motion footage of the shooting analyzed by forensic experts proves the victim was shot from behind when the suspect fired his pistol.

The report also pointed to evidence from the autopsy report in line with the characteristics of the bullet hole in the victim’s body that also showed he was directly targeted.

One of the two officers who were detained on the day of the incident, March 21, 2017, was released after testifying to a prosecutor, while the other, identified only by the initials Y.Ş. was freed under judicial supervision by the court at his arraignment.

Kurkut was studying at Malatya’s İnönü University and traveled to his hometown of Diyarbakır for Nevruz celebrations in 2017. He was staying with his brother. He quarreled with the police at a checkpoint when he was trying to get into the festival venue, photos taken during the incident showed.

Police found poetry books and clothes in Kurkut’s backpack after he was shot on suspicion that he was “a suicide bomber.”

The photos from Gök’s camera were crucial in refuting claims made by the Diyarbakır Governor’s Office following the incident that Kurkut had been shot on suspicion of wearing a suicide vest.

They showed a bare-chested Kurkut approaching a police checkpoint with a knife and a water bottle in his hands, then running past police barricades with several officers chasing after him before finally getting shot in the back and falling to the ground.

According to eyewitness statements, the young man had argued with the police at the checkpoint and was asked to remove his upper clothing. “I don’t have anything on me,” Kurkut reportedly shouted angrily before taking off his sweater, running to a nearby butcher’s shop to grab a knife and returning to the scene of the incident.

“Those photos went down in history proving Kemal’s innocence. If it weren’t for them, Kemal would be known as a suicide bomber who was about to engulf the Nevruz celebrations in blood when he was killed,” Gök told DW Türkçe, reportedly with tears in his eyes.