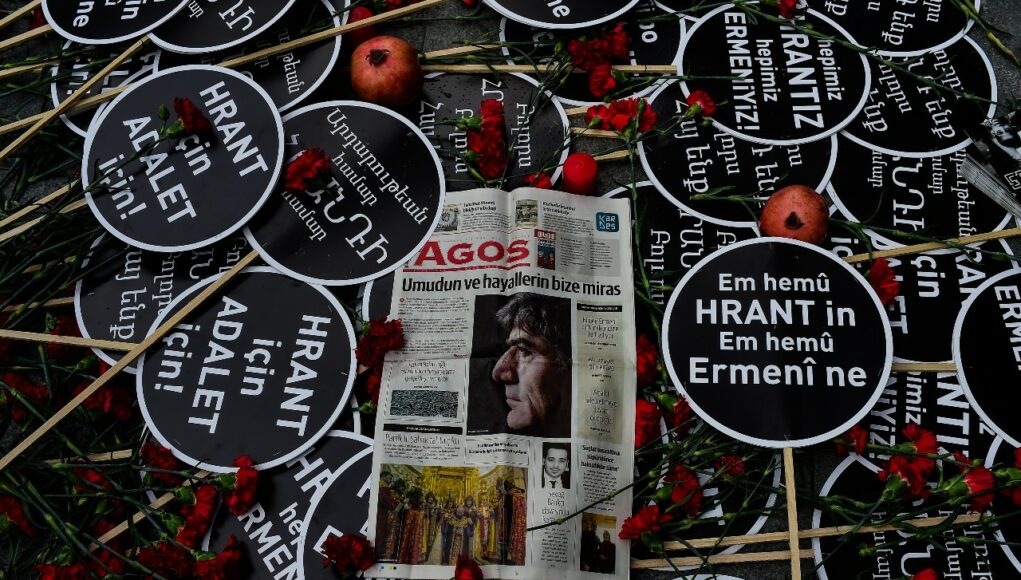 Scores of people on Tuesday continued to call on Turkish authorities to identify all those involved in the murder of Turkish-Armenian journalist Hrant Dink 14 years ago and bring them to justice, days before one of the last hearings in the trial of four people accused in connection with his death.

The 52-year-old Dink, editor-in-chief of the Turkish-Armenian bilingual Agos weekly, was shot dead with two bullets to the head in broad daylight in outside the newspaper’s headquarters in central İstanbul on Jan. 19, 2007, by a then-17-year-old jobless high-school dropout.

His murder sent shockwaves across the country and left a lasting mark on Turkish society because he had been a leading advocate for Turkey’s democratization and for reconciliation between Turks and Armenians.

This year, the journalist was commemorated in a symbolic event attended by a small number of people, including Dink’s family and friends, due to COVID-19 restrictions, in front of Agos offices, where hundreds had gathered on previous anniversaries of the murder.

“They [the authorities] haven’t been able to solve a murder case for 14 years, because it’s not their main agenda. Their main goal is to cover up the issue, but they can’t do that, either. because those involved in it are from many different places [state institutions]. How else can one explain the lack of an effective investigation into this murder for all these years?” Rakel Dink, the slain journalist’s wife said in a statement during the event.

The 14th anniversary of the Dink assassination was also marked with an online event on the website www.hranticinadaleticin.org (justice for Hrant), where people left messages saying “You are here, Ahparig,” which means “brother” in Armenian, in various languages, to commemorate Hrant Dink.

His murder, which remains unsolved to this day, became a wider scandal after judicial proceedings showed that a number of state officials, including then-İstanbul police chief Celalettin Cerrah, were long aware of the assassination plot but failed to act.

More than 75 people have been accused of involvement in the murder in the last 14 years, and a series of trials held without a clear and satisfactory conclusion because links between hit man Ogün Samast and officials in the police and Turkey’s National Intelligence Organization (MİT) have proven to be complex and subject to political manipulation.

The Turkish General Staff on Feb. 22, 2004 released a press statement targeting Dink over a report on Sabiha Gökçen, the adopted daughter of Turkey’s founder Mustafa Kemal Atatürk, being Armenian. The military said Dink’s claims were “unhealthy” and “dangerous” and called on the relevant authorities to act.

He was convicted of “insulting Turkishness” due to columns he wrote after a series of hearings in 2005, over which Dink received death threats and faced multiple attempts of physical assault. His sentence was approved by the Supreme Court of Appeals a year later.

A week before he died, the journalist wrote a piece titled “Why was I chosen as a target?” and detailed the attacks and threats he faced, concluding with racist protests in front of Agos headquarters and criminal complaints filed against him.

Regarding the case of Dink’s murder, the European Court of Human Rights (ECtHR) ruled in 2010 that Turkey failed to protect him, violating his right to life.”

The İstanbul Chief Public Prosecutor’s Office drafted an indictment some 10 years after the murder, saying some officials from the gendarmerie commands of Trabzon and Istanbul not only failed to stop the killing but actually were involved in it.

The İstanbul court that is trying four jailed defendants –former police chiefs Ramazan Akyürek and Ali Fuat Yilmazer, gendarmerie member Muharrem Demirkale and journalist Ercan Gün — will hear the final defense arguments at a hearing on January 22, at the end of which it will set a date for the verdict.

The same court ordered the arrest of three junior officers in the gendarmerie – Veysel Şahin, Volkan Şahin and Okan Şimşek – for “failing to alert their superiors when they had prior knowledge of preparations for the attack against Hrant Dink“ earlier this month.