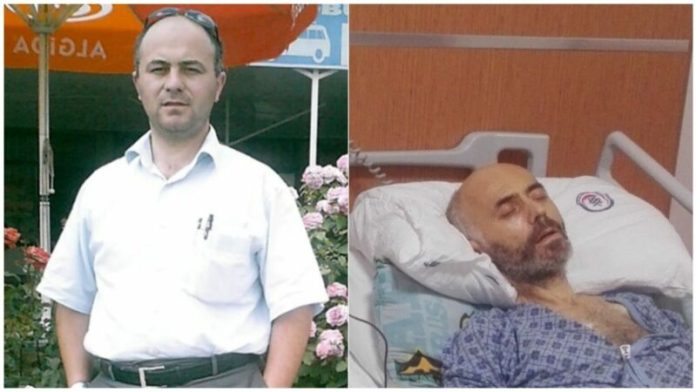 Former police chief Ümit Gökhasan, one of more than 130,000 civil servants dismissed from their jobs as part of a massive purge carried out by Turkey’s ruling Justice and Development Party (AKP) in the wake of an attempted coup in 2016, has died of cancer three months after his release from prison.

Arrested on March 8, 2017 and diagnosed with stomach cancer in January, Gökhasan was not released from prison until August 7, which allowed the stage three cancer to spread to other parts of his body due to the lack of proper treatment.

The death of the 46-year-old was announced by his wife, Şükran Gökhasan, on Twitter. “My beautiful friends, I’ve lost my breath, my oxygen, my everything. My husband Ümit Gökhasan has passed away,” she said.

“My husband lost consciousness around 1 a.m., and he died shortly thereafter. He suffered greatly,” she told the Bold Medya news website on Monday.

“There was serious neglect and delay [in the treatment of Gökhasan] in Afyon Prison,” the lawmaker said. “I’m a witness to all the pain he suffered.”

The former police chief began receiving chemotherapy when he was sent back to prison two weeks after his stomach and a part of the esophagus were removed in a surgery performed in the Eskişehir Osmangazi University Hospital on Feb. 13.

His treatment was stopped due to the COVID-19 pandemic in March, and cancer then spread to other parts of his body, but Afyon State Hospital issued a health report saying that Gökhasan could stay in prison and that there was no reason to postpone his sentence.

However, when the family objected, the hospital revised its decision and issued a report stating he was 80 percent disabled. The Afyon Public Prosecutor’s Office issued his release based on the new report in August.