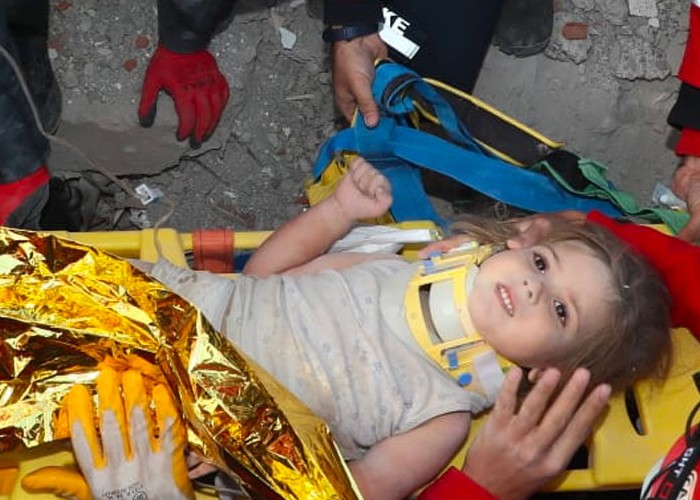 A 4-year-old girl has been rescued from a collapsed apartment building in İzmir 91 hours after a powerful earthquake struck Turkey’s Aegean province of İzmir on Friday, according to Turkish media reports.

The child, identified by authorities as Ayda Gezgin, was rescued on Tuesday morning and was reported to be in good condition. Television footage showed her wrapped in a foil blanket and carried through the wreckage to an ambulance amid the applause of rescue workers.

A member of the search and rescue team in the area told Turkish media outlets that Ayla was smiling when they found her, as if she hadn’t been under rubble for so many hours.

“My coworkers heard her voice. When they extended a hand, they saw it was a child who was moving. We rescued her in tears,” the rescue worker said.

Ayla’s mother was reportedly still under the rubble.

Friday’s temblor was centered in the Aegean Sea northeast of the Greek island of Samos. There was some debate over the magnitude of the earthquake. While the US Geological Survey rated it 7.0, İstanbul’s Kandilli Institute put it at 6.9 and Turkey’s Disaster and Emergency Management Presidency (AFAD) said it measured 6.6.

On Sunday two other girls, aged 3 and 14, were also rescued from the debris of two collapsed buildings.

Elif Perinçek, 3, was taken out of a collapsed building 65 hours after the quake struck, while 14-year-old İdil Şirin was saved seven hours earlier. Both girls sustained injuries and were being treated at a hospital.

Meanwhile, the number of people who died in the quake has risen to 109 as more bodies were pulled from the rubble of the collapsed buildings, according to a statement from AFAD on Tuesday.

A total of 1,027 people were injured in the quake, 883 of whom have been released from the hospital, while 144 others are still receiving treatment, AFAD said.

Search and rescue efforts continue in the rubble of five collapsed buildings in the city where 17 buildings were leveled by the quake.

In the meantime, nine people were detained on Monday by Turkish police as part of an investigation into parties that are allegedly responsible for the collapse of the 17 buildings in the quake that hit İzmir. The detainees include engineering authorities and contractors.

As part of the investigation, carried out by the İzmir Chief Public Prosecutor’s Office, two other people also face detention warrants.

Turkey is crisscrossed by fault lines and is prone to earthquakes. In 1999, two powerful quakes killed some 18,000 people in northwestern Turkey.