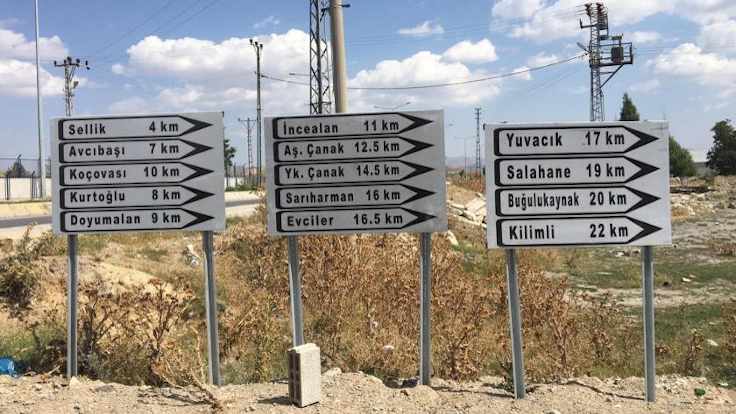 The trustee appointed by Ankara to replace the pro-Kurdish mayor of the eastern city of Van has substituted local placename signs in Kurdish with signs in Turkish, the Evrensel daily reported.

News of the drive to remove the Kurdish language from street signs comes amid reports of a surge in racist attacks on Kurds in the country.

According to the local media, municipal workers recently started taking down street signs displaying the Kurdish names for neighborhoods in the city.

The pro-Kurdish Peoples’ Democratic Party (HDP) won the Van Metropolitan Municipality in the March 2019 local elections with 53 percent of the vote. In August 2019, five months after the election, the Interior Ministry appointed a trustee to replace HDP Mayor Bedia Özgökçe Ertan, who had been removed from office by the ministry due to alleged ties to the terrorist Kurdistan Workers’ Party (PKK).

The process of changing the signs started with Ertan. First, Kurdish signs at town hall were removed. Then, street signs displaying the Kurdish names for local neighborhoods were taken down and replaced with Turkish signs.

After receiving a negative public reaction, the municipality under the administration of the trustee released a statement announcing that the signs had been “renewed,” after which a Kurdish placename was written on only one sign.

Kurdish bans are not new

Many people who spoke, broadcast or sang in Kurdish were imprisoned. The ban officially continued until 1991. Kurds continue their struggle for Kurdish education in schools in the regions where they live. Between 2010 and 2014, when an attempt was made to solve Turkey’s Kurdish problem by means of an official “peace process,” lectures were given in Kurdish in some schools, and Kurdish signs were installed in the cities. These rights were taken back after the failure of the peace talks.

On September 4, 16 Kurdish workers who went to the western city of Sakarya to harvest hazelnuts for land owners were attacked by their employers and local villagers. A short video of the attack, in which women were also assaulted, circulated on social media. The workers had to return home after the attack.

Another incident took place in Afyon on Sunday. Özkan Tokay, a 21-year-old construction worker, died as a result of an armed attack. Two other workers were also injured. Their families, who went to Afyon after the altercation, were denied entry into the city center by law enforcement.

After the attack, while hashtags against racism were created on social media, the video of a young woman supporting the incidents in Afyon and Sakarya also went viral.

In the video the young woman was making the “wolf” sign, a symbol of the far-right Grey Wolves, which is designated as a hate symbol in some European countries.

The HDP released a written statement about the attack and underlined that “the policies and statements of the government are causing an increase in racist attacks.”

“The antagonistic domestic and foreign policies of the government against the Kurdish people and the breeding of a mob mentality in society have led to the picture we have today,” it said.